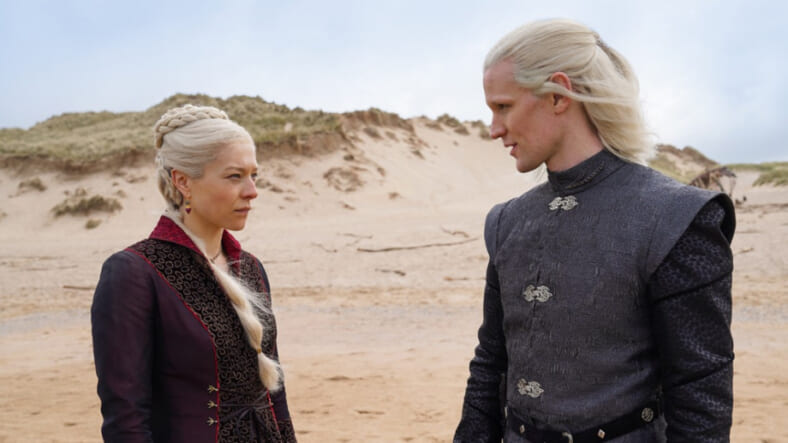 If you’ve spent a few years since (spoiler alert!) watching Arya Stark take out the Night King just jonesing for a new Game of Thrones fix, HBO Max has you covered in the first official teaser trailer for House of the Dragon.

The trailer doesn’t play around with letting us know what we’re going to see when the series begins: “Gods. Kings. Fire. And blood. Dreams didn’t make us kings. Dragons did.”

That may be true but the dragons are only hinted at in the trailer. Here’s the HBO Max breakdown of what the series is about: “Based on George R.R. Martin’s Fire & Blood, the series, which is set 200 years before the events of Game of Thrones, tells the story of House Targaryen.”

In other words, these are the ancestors of the ultimately ill-fated Daenerys Targaryen, played by Emilia Clarke in Game of Thrones. (Like the white-blonde hair wasn’t a giveaway there.) If you need more info, the synopsis for the original George R.R. Martin novel might be more informative—though the story between novels and scripts based on them often changes quite a bit:

Centuries before the events of A Game of Thrones, House Targaryen – the only family of dragonlords to survive the Doom of Valyria – took up residence on Dragonstone. Fire and Blood begins their tale with the legendary Aegon the Conqueror, creator of the Iron Throne, and goes on to recount the generations of Targaryens who fought to hold that iconic seat, all the way up to the civil war that nearly tore their dynasty apart.

At the moment House of the Dragon is set to premiere on on January 1, 2022.