This would scare Pennywise. 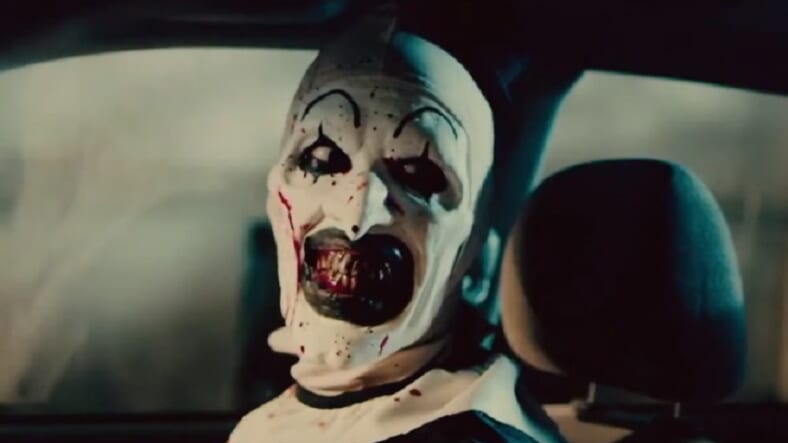 Members of the time-honored profession of clowning are having a tough time these days. Unsettling clown shenanigans have been in the news for a few years. And of course, IT, featuring clown-monster Pennywise, was a huge box office hit.

A movie coming out on home video this April won’t help. Even if Terrifier isn’t a horror great, it’s still got Art the Clown and he is the stuff of nightmares.

Director Damien Leone created Art back in 2008 for a short horror movie, The 9th Circle. Though it’s in release now, Leone originally made Terrifier in 2016. In an interview with Looper said the idea for the character “just popped into my head about a young woman being harassed on a city bus in the middle of the night by this psychopathic clown.”

Leone said Art’s “antics slowly go from playful to threatening until he’s eventually trying to stick her with a needle. What could be more nightmarish?”

Well. Not much. Per Looper here’s the movie’s synopsis:

On their way home from partying, Tara (Jenna Kanell) and Dawn (Catherine Corcoran) cross paths with a mysterious clown on Halloween night. What begins as a seemingly innocent encounter soon takes a turn for the worse as the clown’s playful antics become the prelude to something much more terrifying: The stranger is a sadistic madman named Art the Clown who murders everyone in his path. A gruesome game of cat and mouse ensues as the women take refuge in an abandoned warehouse, becoming the maniac’s latest target. Who will make it out alive and what will be left of them?

That sounds like a lot of fun—if you’re a killer clown, that is.

Terrifier comes out is already out on digital HD. You can soon invite Art into your home on DVD with staggered releases on the second of April and April 9.

Better there than in some dark, empty theater.