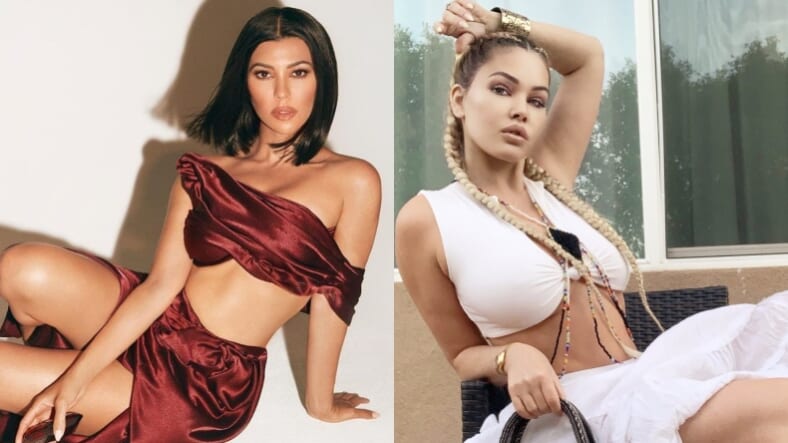 It’s only been a week since Kourtney Kardashian and Blink-182 drummer-turned-music producer Travis Barker made their relationship Instagram official, but Barker’s ex-wife Shanna Moakler is already throwing shade at Kardashian.

The buzzy recent coupling of Barker and Kardashian was born of a 15-year-long friendship, according to Buzzfeed. But Barker and Moakler, who share two teenage children, were married from 2004 to 2006 and starred on MTV’s reality series Meet the Barkers. They briefly reunited in 2009 before breaking up for good a few months later. Barker most recently worked on Machine Gun Kelly’s pop-punk album, Tickets to My Downfall.

The spicy IG feud began between Kardashian and Moakler kicked off after Kardashian posted a cutesy pic of her and Barker holding hands to announce her not-single status.

A follower of Moakler’s left a comment suggesting that Barker had “downgraded” in dating the pop culture phenom, writing, “Shhhhiiiii that broad don’t got nothin’ on you. Travis downgraded big time.”

Moakler, a former Miss USA winner, model and actress, liked that comment before deleting it after others accused her of pitting women against one another. However, Moakler then shared a meme reading, “Stop complaining about your life. There are people out there dating your ex,” in her Instagram stories.

Kardashian also shared an article from her lifestyle website Poosh titled: “How To Break The Habit Of Stalking Your Ex On Social Media.”

Despite Moakler’s social media actions, she had previously said that she’s happy for her ex’s new romance.

“He’s my friend and co-parent, and I want him to be happy,” she told a paparazzo, per the New York Post.

“And if being with her makes him happy, and she’s happy, I’m happy for both of them, honestly. He can handle that Kardashian drama.”

Hopefully Moakler can, too.