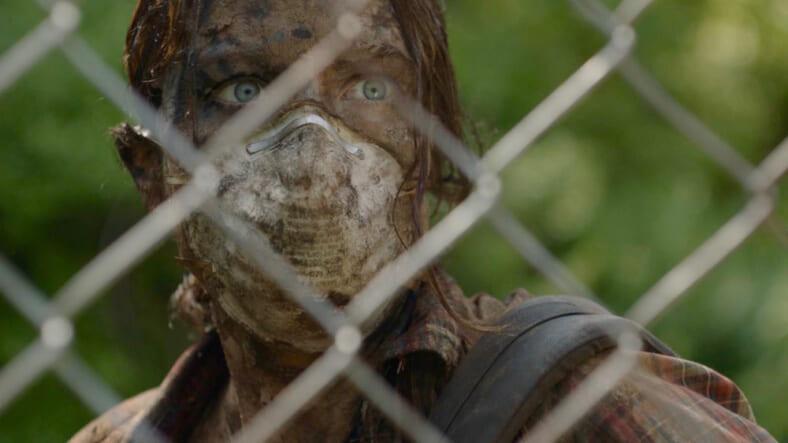 The 15th annual Tribeca Film Festival wrapped up this weekend, with the top prize going to a dark-horse contender. The festival’s coveted Audience Award for Best Narrative Feature went not to some “life affirming” indie but rather the blood-spattered zombie thriller Here Alone.

Directed by Rod Blackhurst and written by David Ebeltoft, the low-budget film trails the survivors of a zombie apocalypse. Tribeca offered the following synopsis:

A virus has ravaged human civilization, leaving two groups of survivors: those who have managed to avoid infection, and those driven to madness, violence, and an insatiable bloodlust. Living deep in the woods, Ann, Chris, and Olivia are forced to fend off the infected while foraging for supplies. But when a supply expedition goes terribly awry, one among their number must make a terrible choice.

According to Dread Central, the film utilizes the evergreen zombie formula to tap into some darker aspects of human nature. “The real threat is despair and the dread that, once survival is all but guaranteed, the only thing worth living for is living itself,” critic Drew Tinnin wrote. “For such a simple story it exudes a real sense of dread and desperation”

The announcement may shock some, especially given that last year’s winner was a tasteful Danish-Icelandic drama called Virgin Mountain (yawn). But for fans of the genre, it is only further proof the genre is gaining critical momentum.

Many point to the success of The Walking Dead for breathing new life into the genre (no pun intended). The series, which is six seasons strong on AMC, has only seen its ratings climb each season and a Golden Globe nomination to boot.

In 2016, zombies will be given the Jane Austen treatment in the hotly anticipated Pride and Prejudice and Zombies, which should make things interesting for English teachers. Likewise, marquee actors like Stanley Tucci and Natalie Dormer will lend some star power to the forthcoming Patient Zero. Festival goers can also look forward to Range 15, the off-the-cuff zombie flick a group of U.S. army vets made that Maxim profiled back in March. But it is 2017 that could be the genre’s banner year, with sequels for both World War Z and Resident Evil expected to crush the box office.

Let’s all do George Romero a solid, and keep the zombie formula alive.