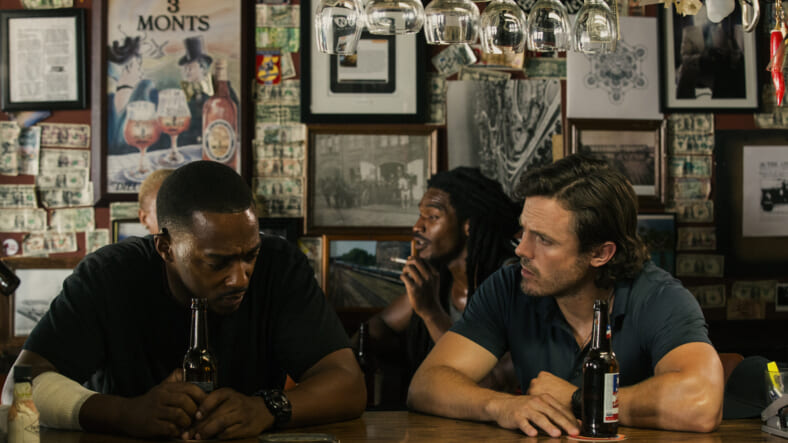 Triple 9 is very much a B-movie with an A-list cast — which would be fine if everything about it weren’t so damned familiar.

It’s one of those projects so stacked with talent that it seems the producers made some sort of deal with the devil to get it funded. The script is so insanely derivative of the crime genre that it can’t even be pegged down to any one key influence — it’s just an amalgam of every much-better heist movie you’ve ever seen.

The film starts promisingly enough with an exciting, in-your-face heist sequence that takes place in broad daylight, and ends on a crowded highway with a lot of gunfire and explosions. It’s here that we meet the first batch of recognizable faces — Chiwetel Ejiofor, Anthony Mackie, Aaron Paul, Clifton Collins Jr. and Norman Reedus — and we quickly learn that these men are all either cops or military. And they’re all corrupt.

Why are such upstanding citizens committing such a heinous crime? That’s because their “leader” Michael (Ejiofor) is tightly wrapped around the finger of a Russian-Israeli mob boss, played by a delightfully miscast Kate Winslet, due to the fact that Michael has a son with Winslet’s sister (Gal Gadot). If Michael and his merry band of corrupt cops don’t commit the very specific heists she requires, Michael will never see his son again.

If that sounds like too much plot, we’re just getting started! We haven’t even been introduced to Casey Affleck yet, who plays an honest cop just trying to make it on the mean streets, under the watchful eye of Sergeant Woody Harrelson, who’s also Casey’s uncle (or something like that, it’s not incredibly easy to follow).

The characters all meet up during the final, titular heist sequence in which the criminal cops are forced to pull a “triple-9” — which is the police code for “officer down” — in order to divert attention away from the real heist, which is at the Department of Homeland Security.Not only is the film every bit as convoluted as that sounds, but it’s full of even more tropes that render it nothing more than a barrage of clichés. It’s another “one last job” heist film with every type of archetype in the book, from “good cop deals with corrupt world” to “deadbeat junkie manages to fuck something up.”

Director John Hillcoat (who made one of the best movies of 2005 with The Proposition) should be commended for avoiding the use of explainer-style dialogue as exposition. Unfortunately, as a result, the film’s ever-widening web of deceit gets so muddled and overly complicated that it’s impossible to be emotionally invested. Rather than spoon-feed the audience information, the film asks the viewer to simply bask in the chaos in the hope that their previous knowledge of heist movies will carry them through.

The actors all commit to the material, but they’re left to play shallow characters — and there’s just so fucking many of them, to the point of extreme excess. Due to the constantly rotating cavalcade of characters, no one role gets a chance to properly resonate, and there are too many loose threads left dangling that it’s just plain tiresome.

Triple 9 is one of those movies that’s gritty as hell and knows it — it thrives in those moral gray areas and almost every character on-screen is despicable for one reason or another; even the good guys are corrupt in this universe. These themes are ripe for exploration, but they’re not that captivating when the entire movie is so ugly and derivative from start to finish.

No matter how stellar the two heist sequences that bookend the film are, they don’t magically render everything that came between them any good. Triple 9 isn’t a bad movie, but it simply goes through the motions. Triple 9 will be released on February 26th.