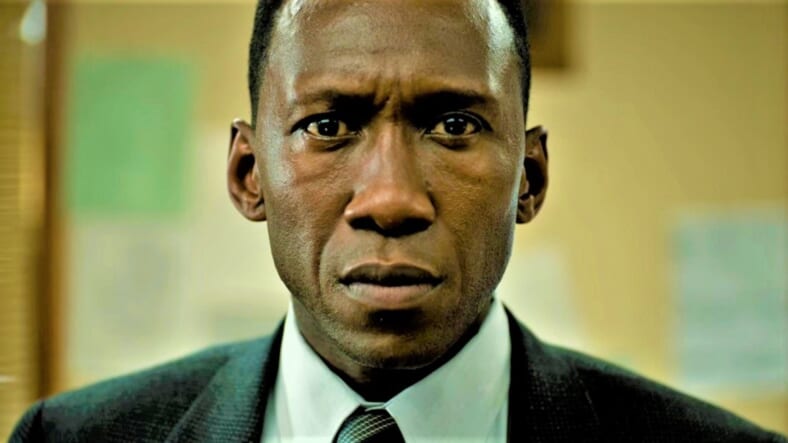 On the strength of Mahershala Ali’s bravura performance as Detective Wayne “Purple” Hays alone, True Detective Season 3 would already be a solid return to form for a drama that went astray in its weird second season.

But it isn’t just Ali’s way of inhabiting a role—or Stephen Dorff’s best work in years as his partner, Det. Roland West—that makes this season so good. It’s a wise return by series writer and creator Nic Pizzolatto to what he proved he did well in the first season: a creepy, complex, Southern gothic mystery.

The Reddit community devoted to obsessively picking apart every element of True Detective has gone into overdrive during the first three episodes. You can’t really blame them; this kind of story can be an automatic addiction for some.

So far we’ve followed Wayne Hays in 1980, 1990, and 2015. In the 80s he and his partner West are first investigating the disappearance of Julie Purcell and the weird, ritualistic murder of her brother, Will. They begin to find the story isn’t nearly as simple as some kind of horrible sex crime, and it looks as if the disappearance may have even been planned by the kids, to some degree.

In 1990 Hays is working a low-level detective job and undergoing interviews about the case as whoever has been imprisoned for the crime is appealing his conviction (the man in prison hasn’t been named yet). He discovers that Julie Purcell is still alive.

In 2015, an elderly Hays is losing his faculties to Alzheimer’s and desperately trying to hang on to the story as he sits for interviews with a true crime documentary crew.

Redditor Arthur3ld believes he or she has figured it out: Wayne Hays is confronting a pair of coverups. Portions of the theory below:

…There are two cover ups at play, one in 1980, and another in 1990.Will and Julie planned to run away the day they went missing. They went to meet an older person who was grooming Julie for abduction. Will was secondary, Julie was their main target. My main suspect is the wife of the chicken plant owner, who lost her daughter. The portrait in the office shows a woman holding a blonde child. She may have used surrogates. I believe she is the white woman seen in a brown sedan with a black man the day the kids went missing.Why run away? The creepy-cousin-uncle molested Julie [an uncle who drilled a peephole in the girl’s bedroom wall – Ed]. Will found out. The parents either acted like it didnt happen, or didnt believe her, or didnt know. In any case, Julie doesn’t feel safe and loved in her own home. Will and Julie plan to run away.

At some point they begin meeting with a stranger in the woods. Stranger buys them toys, plays games with them, and promises Julie someday she’ll get married and she’ll be taken away from all the pain at home. She starts drawing wedding pictures. I suspect the notes are from Will, passed through the peephole, promising to always protect his sister.

The Purcell kids’ parents worked at a large chicken processing plant in the area, and Hays’ and West’s investigation takes them there, where they find good reason to be suspicious of the plant owners—odd activity around the time of the disappearance, including an unexpected vacation. According to this Redditor, the “chicken magnates” are integral to the 1980 cover up:

[They] aren’t part of a pedo ring, they only abducted the one child, Julie. The dolls are red herrings planted by the perps to make it seem like a cult thing. Purple remarks that the dolls seemed like they were staged, so he could find Will’s body. Maybe Will fought back when they tried taking his sister. Maybe he tried running away and telling someone and accidently died. Maybe they killed him to cover their ass.The charity from the chicken plant puts a reward out. Hays and West are blindsided by it. One of their higher ups was contacted by the charity, gave it the go ahead, and didnt tell their lead detectives. Locals claim to never be interviewed by police. A single detective/prosectutor talks to the old man in the farmhouse, doesnt file reports, and possibly takes evidence from the house to cover his tracks. All signs point to the head prosecutor bungling the case intentionally. He does so to rise through the ranks and become state prosecutor, due to his chicken magnate benefactors that he is covering for. The other prosecutor deposing Hayes and West is suspect as well.

So: One kid (Julie) has been kidnapped for unknown reasons and is being held, the other killed to silence a witness.

Then there’s the second conspiracy in 1990. Hays learned from one of the attorneys deposing him that Julie’s prints have been found in a Walgreens in another state. He and his wife Amelia, who goes on to write a best-selling book about the case, go to the Walgreens to try and track the girl down. Here’s where Arthur3ld starts making assumptions:

[Julie Purcell] somehow escaped or was let go by her captors. Purple finds her and she tells him everything. How the people who took her are very powerful, and she just wants to live her life and be left alone. She is probably married with kids and doesnt want to drag them into her horrible past. Purple starts covering up all the clues that led him to her, and sabotaging the reopened investigation.

That’s a lot of thinking, Arthur. Anyway, the redditor concludes that 2015 Wayne is losing the ability to think straight but he’s still invested in protecting Julie from the public. He has threatened suicide if he’s put in a home, but this theory states he would rather kill himself than actually reveal what he knows to the TV crew.

In essence, Wayne Hays isn’t just a retired detective in the present day, he’s a protector of secrets, still, fearful that if he does reveal what he knows, he will endanger everyone he still loves, as well as the adult Julie Purcell.

If true, he’d still be the inarguable hero of the show, but a very complicated and unexpected one, just like McConaughey’s Rust Cohle from Season 1.

Of course, these are just fan theories, and the internet is full of those. If you’re intrigued, begin your own journey down the True Detective Season 3 rabbit hole with this Google search. Good luck with that.