“Life sometimes goes… like you don’t expect it to.” 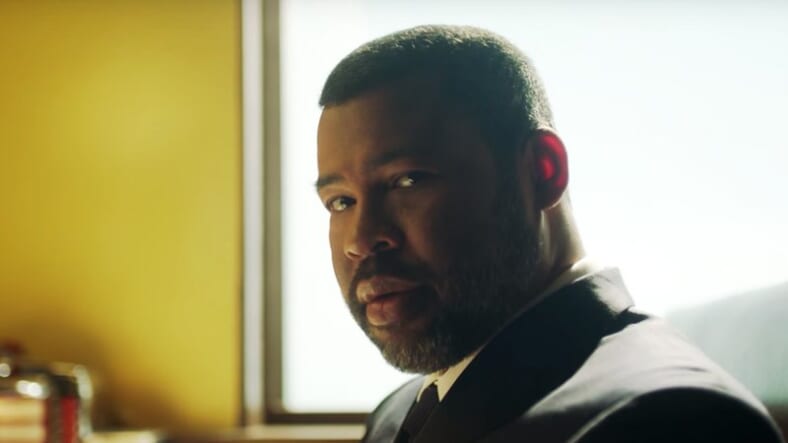 True super fans of The Twilight Zone, Rod Serling’s surreal anthology series that ran from 1959 to 1964, should be pleased. They won’t be, because that’s how die-hards often roll, but one thing is obvious from the first full-length trailer for Jordan Peele’s CBS All Access reboot: He has tremendous respect for the spirit of the first show.

Or he’s into tweaking William Shatner, one way or the other. Viewers do have to watch closely to see, but in select, eerie shots we get nods to some classic episodes from the Serling original, two which featured Shatner: “Nightmare at 20,000 Feet,” and “Nick of Time.”

The first nod is a quick shot of what is obviously the discarded costume head of the creature Shatner saw on the wing of a plane in “Nightmare,” the second is the drunken-looking devil’s head atop the prediction machine in “Nick.”

But let’s not lose sight of the dark and scary forest in being distracted by these weird-ass trees. What’s most important is that Peele gets it.

As the trailer ranges through scenes from episodes of the reboot, the eerie vibe ratchets up, one precise twist at a time. It’s in the camera work, the callbacks, and even out-of-context lines, like the one said near the end, just before we see Peele—our new-age Serling—for the first time: “Life sometimes goes… like you don’t expect it to.”

Yes, it kind of sums up one of the key reasons the Serling show became so iconic. Nothing ever seemed to go the way you expected it to. That’s the show in a nutshell.