She claims Quentin Tarantino was responsible. 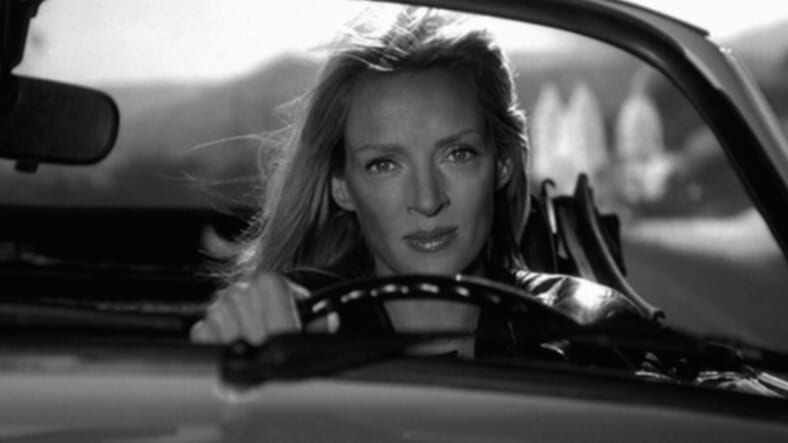 You’ve likely heard that Uma Thurman is the latest actress to accuse producer Harvey Weinstein of sexual harassment… and you’ve heard a car crash and Quentin Tarantino are also involved.

Before we break down what happened, here’s the car crash that could have killed Uma on the set of Kill Bill. It was released by The New York Times, but Uma just shared the video on Instagram.

In an explosive interview with The New York Times, Thurman revealed that her relationship with Quentin Tarantino, who directed her in Pulp Fiction and again in Kill Bill Volumes 1 and 2, is not the genius-muse love-in suggested by Tarantino fan lore.

Thurman alleges that Tarantino coerced her into driving a shoddy blue convertible, the one from which she delivered the “I am gonna kill Bill” monologue, against her insistence he use a stunt double instead.

She claimed the car was faulty, after being reconfigured from a stick shift to an automatic, and described it as a “death box.”

“Quentin came in my trailer and didn’t like to hear no, like any director,” Thurman recounted. “He was furious because I’d cost them a lot of time. But I was scared. He said: ‘I promise you the car is fine. It’s a straight piece of road.'”

Tarantino eventually persuaded her and insisted, “‘Hit 40 miles per hour or your hair won’t blow the right way and I’ll make you do it again.'”

The fallout from the crash was equally painful for Thurman.

“The steering wheel was at my belly and my legs were jammed under me. I felt this searing pain and thought, ‘Oh my God, I’m never going to walk again,'” Thurman said.

“When I came back from the hospital in a neck brace with my knees damaged and a large massive egg on my head and a concussion, I wanted to see the car and I was very upset. Quentin and I had an enormous fight, and I accused him of trying to kill me. And he was very angry at that, I guess understandably, because he didn’t feel he had tried to kill me.”

Miramax withheld the footage from Thurman, demanding she sign a document “releasing them of any consequences of my future pain and suffering.” Tarantino finally handed her the footage 15 years later.

“Quentin finally atoned by giving it to me after 15 years, right?” she said. “Not that it matters now, with my permanently damaged neck and my screwed-up knees.”

Thurman believes the incident was indicative of the abusive treatment she has received in Hollywood.

“Harvey assaulted me but that didn’t kill me,” she says. “What really got me about the crash was that it was a cheap shot. I had been through so many rings of fire by that point.”

“I had really always felt a connection to the greater good in my work with Quentin and most of what I allowed to happen to me and what I participated in was kind of like a horrible mud wrestle with a very angry brother. But at least I had some say, you know?”

The incident followed two accounts of Weinstein, the producer on all of Tarantino’s films, harassing Thurman: once by pulling his usual bathrobe act in a Paris hotel room, again by shoving her down on a bed in a London hotel room.

Both occurred around the 1994 release of Pulp Fiction. Thurman alleges she told Tarantino about the London incident but that he brushed it off.

“There was more to it than just the normal rumors, the normal gossip,” Tarantino said in an interview with The New York Times after the release of the bombshell Weinstein expose.

“I knew enough to do more than I did,” he said. “It wasn’t secondhand. I knew he did a couple of these things.”

“I wish I had taken responsibility for what I heard. If I had done the work I should have done then, I would have had to not work with him.”

In her Instagram post, Thurman suggested her relationship with Tarantino may have improved… and that he signed off on her releasing the video.

“Quentin Tarantino, was deeply regretful and remains remorseful about this sorry event, and gave me the footage years later so i could expose it and let it see the light of day, regardless of it most likely being an event for which justice will never be possible, he also did so with full knowledge it could cause him personal harm, and i am proud of him for doing the right thing and for his courage.”

It has not absolved him of controversy. While not related to sexual assault, his mistreatment of Thurman is the latest wrinkle in the #MeToo and #TimesUp saga.