“You should give your mom a big hug and tell her it’s from the Undertaker.” 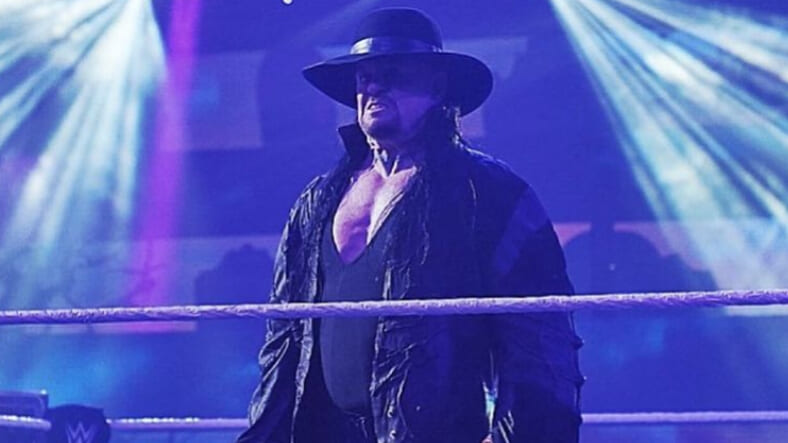 If you didn’t choke up or cry watching this you don’t love professional wresting.

WWE boss and wrestling heel Vince McMahon appeared to give the Dead Man’s last ring introduction, saying “Tonight marks the end of an era. An end of an era of the most storied career in history, it’ll never be duplicated.” A hologram of Taker’s late and great longtime manager Bill Moody then appeared before the man himself proclaimed, “My time has come to let the Undertaker rest in peace.”

The event served as a proper sendoff to one of the WWE’s all-time icons. And with extra time on his now gloveless hands, the famously reclusive character launched both a TikTok and a limited-time deal with Cameo. Forbes notes that 30 people had the opportunity to receive a personalized video message from Undertaker for $1,000 each, all of which sold out almost immediately.

The Cameo clips went viral as soon as they were live, and for good reason. Hearing the Deadman deliver heartfelt messages to fans with his signature dramatic pauses and foreboding tone is both endearing and hilarious.

the $1000 taker cameos are live pic.twitter.com/vXSt5QsLsx

“It’s the Undertaker. And your mom reached out to me,” he said in one. “She told me you started a new school this year. And she also said that you were quite the baseball player.”

the deadman believes in you pic.twitter.com/UwNG3VBpbK

“I just wanted to reach out and tell you it’s gonna be OK. You just keep waking up every morning and putting one foot in front of the other,” he encouraged in another.

got real worried when he started talking about counting votes, but it goes in a different direction pic.twitter.com/srrBrMCIFW

“All of the votes have been cast and they’ve all been tallied,” another began before a comedic twist. “And it looks like you, Robbie, are the greatest Undertaker fan of the last 30 years!”

you should at least do the first half of this, when it is safe to do so pic.twitter.com/Pri6n5avRx

“You should give your mom a big hug and tell her it’s from the Undertaker,” Taker urged in a particularly wholesome Cameo.

AJ may have actually gotten their $1000 worth here pic.twitter.com/i96kqJiQzc

If we were talking about any other sport, the Undertaker’s retirement would seem conclusive. But this is the WWE, where Ric Flair, Goldberg and other stars have made comebacks in dramatic fashion. Even at 55, Undertaker didn’t entirely shoot down the idea of doing the same in his 2020 documentary The Last Ride.

“If Vince was in a pinch, would I come back? I guess time will only tell there. ‘In case of emergency,’ you break glass and pull out The Undertaker. I would have to consider that. Never say never, but at this point in my life and my career, I have no desire to get back in the ring.”