Crowe’s new thriller is scheduled to open in actual movie theaters on July 1–the first movie to screen in theaters during the pandemic. 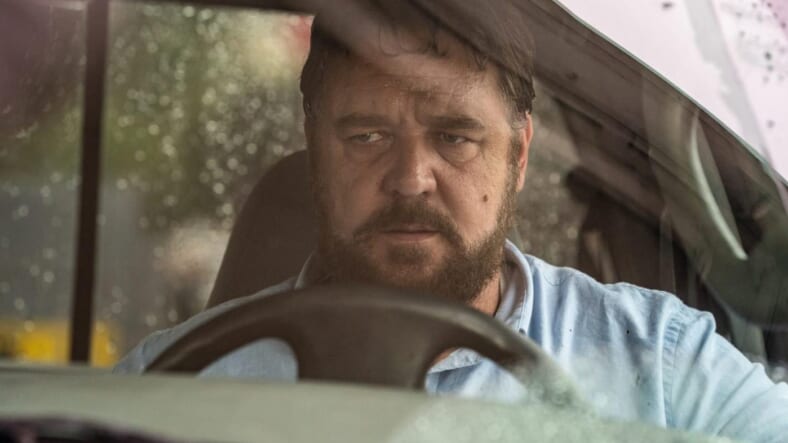 Russell Crowe is the embodiment of road rage in Unhinged, in which he plays a troubled stranger who targets a woman after an altercation at a traffic light.

While the movie itself appears to be a diverting genre thriller that would be at home on-demand or on a streaming service, Unhinged has been making headlines since Solstice Studios moved up the actual movie theater release date from September 4 to July 1 after movie theaters were shuttered because of the coronavirus pandemic.

CNN reports that Unhinged will be the first movie to be released in movie theaters during the pandemic and will likely be an indicator as to whether crowds will return to actual theaters.

Academy Award winner Russell Crowe stars in Unhinged, a timely psychological thriller that explores the fragile balance of a society pushed to the edge, taking something we’ve all experienced- road rage – to an unpredictable and terrifying conclusion. Rachel (Caren Pistorius) is running late to work when she has an altercation at a traffic light with a stranger (Crowe) whose life has left him feeling powerless and invisible.

Soon, Rachel finds herself and everyone she loves the target of a man who decides to make one last mark upon the world by teaching her a series of deadly lessons. What follows is a dangerous game of cat and mouse that proves you never know just how close you are to someone who is about to become unhinged.

Solstice chairman and CEO Mark Gill told Deadline that the 2021 movie calendar soon became crowded after most films were pushed back, so he decided to try it sooner with the July 1 release date. Many movies have been moved to video on demand or streaming, but Unhinged is betting that audiences will be ready to sit in a theater by July 1.

Are you stir-crazy enough to see Unhinged in a movie theater? Check out the trailer above and judge for yourself.