Which classic games should reign supreme? 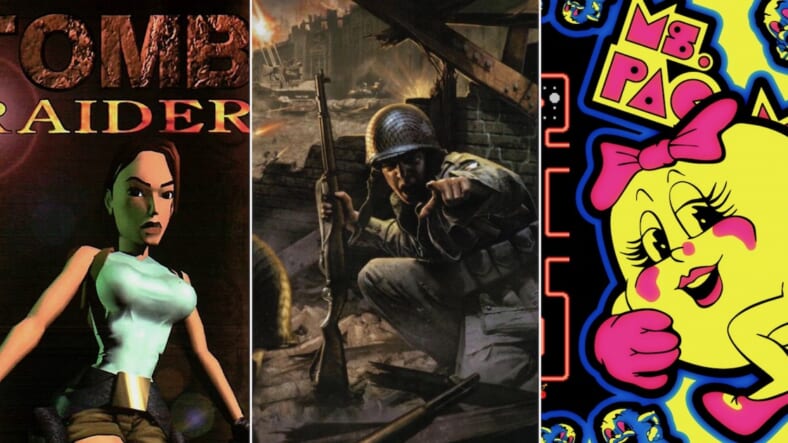 The “World Video Game Hall of Fame” has announced which classic games will be inducted in 2018, and the annointed games span genres and decades.

Some you may expect to have been inducted long ago, like today’s wildly popular Call of Duty and the old-school favorite, Ms. Pac-Man, which dates back to the 1980s.

Others have sudden relevancy, like Tomb Raider, which was just made into another Hollywood franchise with Alicia Vikander taking over Angelina Jolie has Lara Croft.

Gamers can vote for their favorites, and the results will be considered by judges. The lucky inductees will be announced by The Strong museum on Thursday, May 3.

Here, the 12 finalists for 2018, along with a history on each from the World Video Game Hall of Fame:

“Released in 1979, Atari’s Asteroids offered players challenging gameplay, glowing graphics, and intense sound effects in an action-packed space setting. The game quickly supplanted the popular Space Invaders in many arcades and sold more than 70,000 arcade units. The home version of the game—made available on the Atari 2600—took the game’s popularity to new heights, bringing it into millions of living rooms.”

“Launched by Infinity Ward/Activision in 2003, Call of Duty helped to popularize the cinematic first-person shooter game. It dropped players into a fully realized World War II setting, allowing them to see the global scale of the conflict from the viewpoint of an American, British, and Russian soldier. The blend of realistic action; historic narrative; and online, multiplayer capabilities made it a quick success. It launched one of the best-selling game franchises of all time—with the game and its sequels accounting for more than 260 million units sold worldwide since 2003.”

“Konami’s Dance Dance Revolution took Japanese arcades by storm in 1998, challenging players to use their balance and dexterity to step to the beat of popular music. The fast-paced game spread quickly to arcades across the world, and Konami spun out a home version of the game on the Sony Playstation the following year. More than 100 versions of the game have been produced since 1998, and Dance Dance Revolution helped to pave the way for iconic music games such as Guitar Hero and Rock Band.”

“Square Co.’s Final Fantasy VII took the already popular Final Fantasy series to new levels of technical achievement and story development when it debuted in 1997. It introduced 3-D computer graphics; full-motion, video cut-scenes; and a deep, complex storyline to the franchise. The game sold more than 10 million units, making it the second most popular game for the Sony Playstation, and helped to popularize the Japanese role-playing genre across the globe.”

“Created by Valve/Sierra Studios in 1998, Half-Life revolutionized the first-person shooter genre of games. It challenged players to escape a research facility after an experiment gone wrong and combined a rich story, scripted sequences, unique puzzles, and sophisticated gameplay elements. Later expansions added head-to-head and co-op gameplay options, along with the ability to modify the game itself, providing countless replay possibilities. The game has sold more than 9.3 million copies and inspired two sequels.”

“Electronic Arts redefined the modern sports video game with its 1990 reboot of John Madden Football. The new game moved beyond its sports game predecessors that emphasized statistical modeling, transforming the virtual gridiron into an action game that thrived on individual confrontations between virtual players. The game created a pop cultural phenomenon that has sold more than 100 million copies since its debut.”

“Designed by Sierra On-Line cofounder Roberta Williams, King’s Quest (1984) introduced players to the fantastical world of Daventry. The fairytale setting, unique visuals, and irreverent humor helped to make the game a hit on personal computers. Sierra On-Line produced seven sequels, and the game influenced dozens of adventure games that followed and established Williams as one of the most significant game designers of the 1980s and 1990s.”

“Nintendo’s Metroid launched in 1986 and inserted players into a futuristic world brimming with innovative adventure and evocative music. The game combined the platforming of Nintendo’s Super Mario Bros. and non-linear story elements from The Legend of Zelda, offering a new game play experience. The protagonist, Samus, also gave the gaming industry its first playable human female character in mainstream video games. The game launched a franchise with 13 core titles that has sold more than 17 million units worldwide.”

“With its endless game play possibilities, Minecraft has become a global phenomenon in the seven years since its introduction in 2009. Players in a worldwide, online community make their own creations using sets of pixilated blocks that they mine and use to build elaborate structures. As of 2018, the game had sold more than 144 million copies across several platforms.”

“Capitalizing on the success of the iconic Pac-Man arcade game, Midway launched Ms. Pac-Man in 1981. The sequel featured more sophisticated mazes, smarter opponents, and new challenges. It also reimagined the title character as female, extending an invitation to girls and women to join the universe of gaming. With its wide appeal, Ms. Pac-Man sold 125,000 cabinets within five years of its release, making it one of the five best-selling arcade games of all time.”

“Members of the Massachusetts Institute of Technology Tech Model Railroad Club created Spacewar! in 1962 on a minicomputer. The game featured two starships firing torpedoes at each other, and its competitive aspects helped it to spread from computer center to computer center across the globe. This early video game inspired the first mass-market arcade video game, Atari founder Nolan Bushnell’s Computer Space, and helped to launch the multi-billion-dollar video game industry.”

“Combining the best elements of action-adventure games with platform games and puzzle-solving, Tomb Raider (1996) provided gamers with a unique cinematic 3-D universe, cutting-edge graphics, and a female protagonist who remains an iconic figure in gaming. Largely thanks to the character of Lara Croft, and Angelina Jolie’s theatrical portrayal of her in a blockbuster movie, Tomb Raider enjoys a widespread appeal among gamers and non-gamers alike, and currently heads a franchise that has sold more than 58 million units worldwide.”