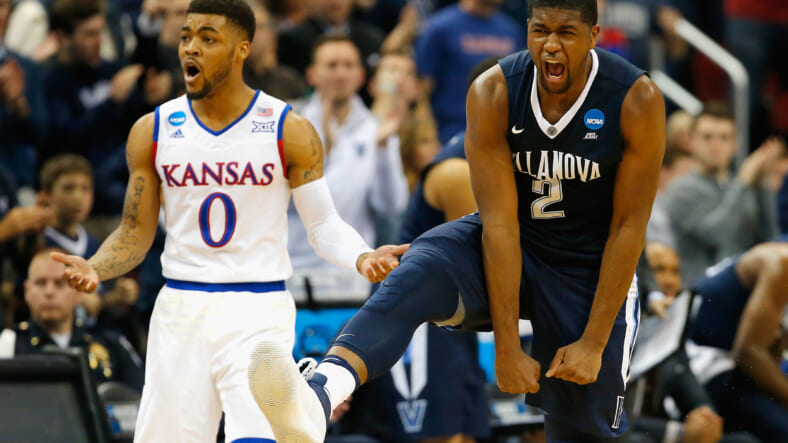 Monday night’s NCAA title game was a forty minute track meet, with two high scoring offenses pushing the ball up and down the court with the frenetic energy that only juiced up undergrads could summon. In the end, the game will be remembered for what happened in the final five seconds, as Villanova junior Kris Jenkins pulled up from the three with the game tied at 74 and gave his Wildcats the championship with one of the most memorable buzzer beaters in NCAA Tournament history.

But let’s hit rewind for a minute. History will remember that shot. The rest of the game is likely to be forgotten in time. Not today though.

The story of the game’s first half was Carolina’s three-point shooting. This was, as viewers were repeatedly told during the broadcast, the worst three-point shooting team in Tar Heel history and yet they managed to make 7 of 9 from behind the arc in the first 20 minutes. Sophomore guard Joel Berry led the way with 15 first half points.

In the second half, Nova made its run, aided in part by UNC’s inability to keep up its hot shooting and the unexpected contribution from guard Phil Booth. The sophomore played 25 minutes off the bench and scored a career high 20 points, including theathree that put the Cats up 49-46.

Nova went on a run after this shot, thanks to crafty moves like this one from senior point guard Ryan Arcidiacono.

The Nova lead reached 10 with 5:29 on the clock and then the Heels made their run. It looked too little too late , but with 13 seconds left on the clock and Nova up three, Marcus Paige knocked down an absurdly difficult game-tying three.

MJ was pleased. That shot should have sent the game to overtime. It should have broken Nova’s spirit and made the five minute extra period a technicality. Paige should be today’s hero.

Kris Jenkins changed that. And Arcidiacono made that possible, with his quick drive up the court, subtle screen for Jenkins and gentle pass. And before both of them, Villanova coach Jay Wright made it possible with a play call that would ensure the ball in his best players hands as time expired. But Jenkins made this moment. The junior guard said after the game, “I think every shot’s going in and this one was no different.” He was right, and the Wildcats are champs.