HBO’s brilliant miniseries did NOT sit well with the Russians. 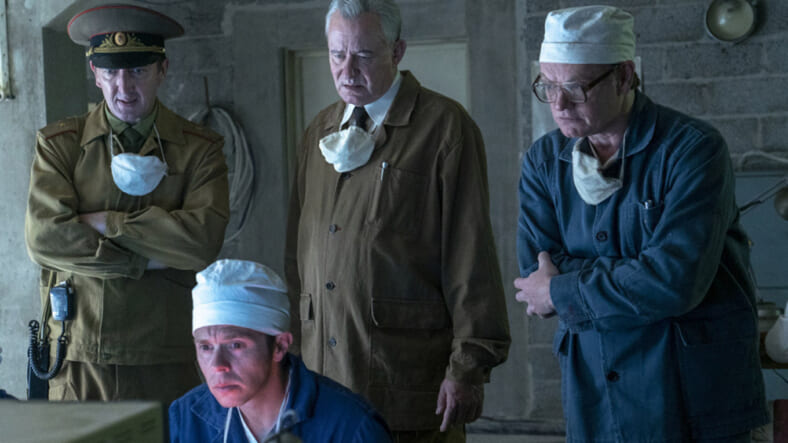 Vladimir Putin has no chill. Apparently the Russian Federation president was none too pleased with HBO‘s Chernobyl, the amazingly well-made miniseries portraying the 1986 nuclear disaster in Ukraine, and he feels a need to set things straight.

The Russian version of “straight,” that is—meaning he’d like to spin it so that it looks like the United States caused the power plant’s meltdown via a CIA saboteur.

Actually, this alternate facts version of the disaster is already in the works. This report on Putin’s intentions comes from The Moscow Times:

Russia will never celebrate the Chernobyl events as a holiday — and if leaders cannot turn it into a fete of national pride and greatness, then better to forget that it ever happened at all.Still, an attempt will be made to put an entirely different spin on those events. Russia’s NTV channel has already announced that it is shooting its own “Chernobyl” series based on the premise that the CIA sent an agent to the Chernobyl zone to carry out acts of sabotage.As justification for the story, the film’s director, Alexei Muradov, cited fringe conspiracy theorists: “One theory holds that Americans had infiltrated the Chernobyl nuclear power plant and many historians do not deny that, on the day of the explosion, an agent of the enemy’s intelligence services was present at the station.”

This is a pretty good argument for understanding that the Russia of today really isn’t all that different from the USSR, after all.

Putin was a KGB officer at the time Chernobyl occurred, and there’s no reason to believe the fall of communism made him any less aware of how a government can make its own truth.

Problem is, the HBO production was so authoritative and well-made, it looks like this propaganda battle has already been lost.

But maybe the audience the Kremlin seeks for their version isn’t international at all; as long as Russians believe what they want to believe, that’ll work for Putin.