Another Major ‘Walking Dead’ Character Was Killed Off, And Twitter Is Losing It 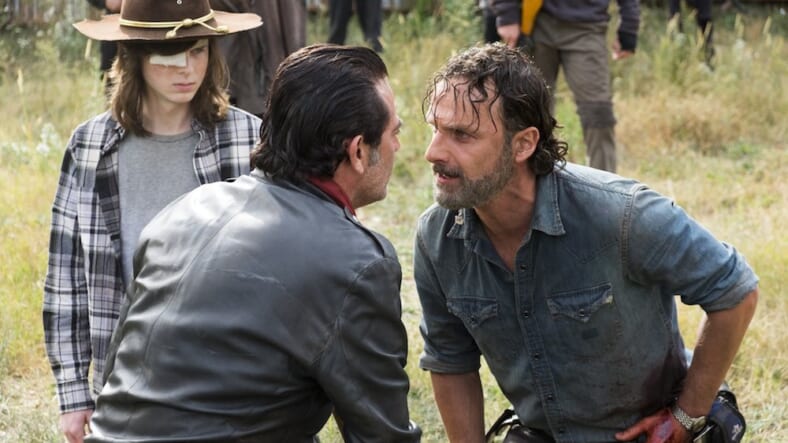 Fears that the character Carl, the son of lead character Rick Grimes, would kick the bucket after being bit by a zombie in a previous episode were justified. The eye-patched teen took his life, but not before giving his family a heartfelt goodbye.

From his deathbed, he pleads that Rick and Michonne be more compassionate to the world and survivors of the zombie apocalypse.

Rolling Stone points out that Carl’s death marks an inflection point for Rick, now that his prime motivation is gone.

How many times has Sheriff Grimes justified some of his most questionable decisions by saying that he’s doing it to keep Carl safe and to make him a better man. Well, his son just died. Now what?

That nor Carl’s death itself is not what upset fans most. It was his parting words with Daryl that many believed to be disappointing in its brevity and lack of emotionality.

“These people, you saved them all. That’s all you man,” Daryl says to Carl, before walking off the screen without ever touching or hugging Carl.

That’s all the goodbye Daryl could give to Carl?? Bullshit. #TheWalkingDead

I deserved a better daryl & carl goodbye. But ofc I was robbed.

Anti climactic. Sorry goodbye between him and Daryl POS episode. I just. #TWD

Maybe it’s part of his hardened warrior vibe, but a lot of people agree he could have said more than “Thanks, see ya!”

The fact that Siddiq had more to say to Carl than Daryl did is a testament to how shitty the writing has become. #TheWalkingDead

It’s not uncommon for The Walking Dead to kill off one of its best-known characters, but many felt Carl’s goodbye was rushed and awkward.

The Walking Dead is now in its eighth season on AMC.