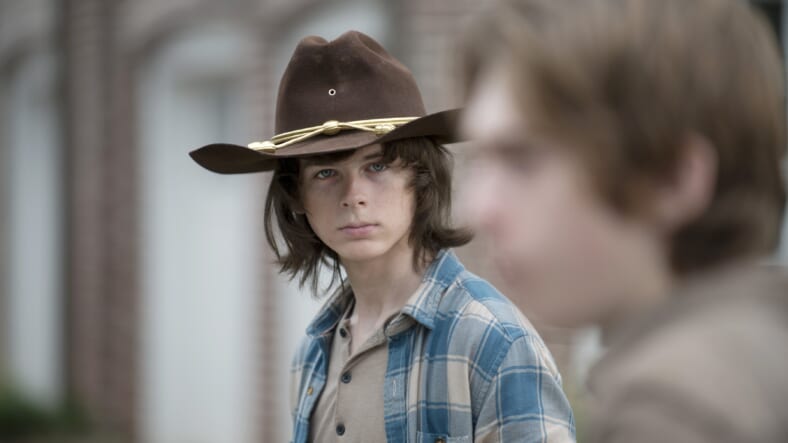 Longtime fans of The Walking Dead know that the series, like the post-apocalyptic survivalism it portrays, can sometimes be a long, brutal slog. The first seasons of the show dragged Rick’s band of survivors through a seemingly never-ending series of struggles: searching for the CDC in Atlanta, holing up on Hershel’s farm, making a home at the prison, and surviving in the wilderness until arriving at Alexandria. Even the action-heavy first half of the series’ sixth season, marred by Glenn’s fake-out death, spread the events of a single day over eight episodes. The series has been in need of a revitalization for some time.Luckily, The Walking Dead‘s Valentine’s Day mid-season premiere is the shot of adrenaline the series has desperately needed. Everything about the episode signals a violent chapter on the horizon for Rick’s group of survivors, dripping in blood and reeking of gunpowder. Let’s recap, shall we?[Warning: Spoilers]

Daryl blows Negan’s men away: Stopped during their return to Alexandria in a post-credits scene at the end of “Start to Finish,” Daryl, Abraham and Sasha find themselves in what seems like an impossible jam, forced to surrender their sidearms to armed (and wisecraking) cronies of the insane Negan. But Daryl (being, well, Daryl) managed to turn the tables with the help of the RPG launcher that Abraham recovered back in “Always Accountable,” reducing the armed gang to a smoking crater in the middle of the highway. This scene is both unexpected and cartoonishly awesome. But it’s also indicative of just how brutal the clash between Negan’s Saviors and Rick’s crew of Alexandrians is going to be. We already know that Negan (played by Jeffrey Dean Morgan, but only mentioned by name in the mid-season premiere) is a twisted, brutal psychopath who, in the comics, beats Glenn to death with a baseball bat encircled with barbed wire and psychologically breaks Carl after a horrifying injury (more on that soon), so it makes sense that the showrunners would tease him as much as possible. But this sequence also tells us that Negan’s already going to be out for blood when he finally meets Rick and company face to face — and that means we’re in for the largest conflict we’ve seen in the series yet.Carl learns about ‘and eye for an eye’ the hard way: Let’s be real: We knew that whiny, pants-pissing Sam was going to eat shit in the opening minutes of the mid-season premiere, and we truly were not shocked  that Jessie, Rick’s milquetoast love interest, would flip out and get torn apart by zombies in the process, just as she does in the comics. Frankly, their deaths were inevitable: They existed only to underscore the fundamental weakness of the relatively pampered Alexandrians and, in turn, reinforce the domination of Rick and his group over the nascent community’s daily operations.But what came next was a shocker even for longtime fans of the comics. With a distraught Ron targeting Rick and Carl for getting his whole family killed (which, well, true), the teenage bastard finds himself run through on Michonne’s sword. This in itself is a big moment for Michonne, reinforcing her maternal relationship with Carl and pushing her to a new level of violence, but it’s the stray round squeezed off by Ron that changes everything — by ending up in Carl’s eye, recreating a horrifying scene from the comics.

This wound is going to send the character places we’ve never seen before. Tech Insider reminds us that in the comics, Carl’s injury plays an integral role in his relationship with (and the character arc of) Negan, something director Greg Nicotero mentioned Tech Insider:

“In the future, you know, Carl reveals, in the comic book, his wound to Negan and Negan and Carl sort of generate this weird friendship because Negan looks at him like, ‘Damn. You’ve been through a lot and you’re still here, kid.”

Carl’s injury won’t just change him forever, but Rick as well. Let’s remember that Rick dove into the heart of the prison after Laurie’s death, killing zombie after zombie to channel his rage. Rick was a changed man after that, and we expect to see a new level of savagery from a man who’s been pushed to the brink since the show’s pilot.And that leads us too…

Rick takes on the world in the Battle for Alexandria: If you recall, Rick and his fellow survivors found themselves totally fucked at the conclusion of the season’s first half. With Alexandria flooded with walkers and the armory out of reach, Rick finds himself in the middle of the zombie horde, covered in guts, at the moment of Carl’s horrifying injury. After a panicked Rick and Michonne manage to bring Carl to the town’s infirmary, we see Rick snap again, taking on the entire horde with nothing but a machete.But something happens. Rick’s anger, his savage rage, have put him at odds with the cowardly citizenry of Alexandria since his band of survivors arrived at the gates last season. This is why they were invited in in the first place: they were survivors, they had lived “out there.” This is one of the first times we really get to see the Alexandrians step up and put their lives on the line for their community, motivated by the very rage that drove Rick to execute their surgeon just a few episodes ago. This is a turning point for their community, one that’s going to serve them well in the upcoming conflict with Negan and his Saviors.We’re still not sure what comes next for Rick and his fellow survivors after this hellish day, but we’re sure of one thing: if this season is anything like its premiere, we’re in store for some of the best programming of the year.