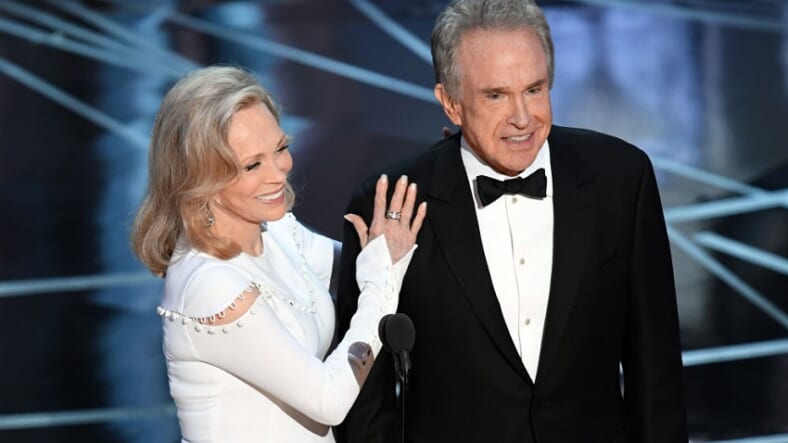 WATCH: The moment Warren Beatty gave what appeared to be a second look while opening the Best Picture envelope. #Oscars pic.twitter.com/SJkQYEu75k

Let’s be clear: When legendary Hollywood lover, actor, and director Warren Beatty and his one-time Bonnie and Clyde costar Faye Dunaway announced the wrong winner for best movie at the Academy Awards Sunday night, they may have just been given the wrong cue card.

The actual best picture winner was the complex, well-acted and beautifully-filmed Moonlight, about a young, gay black man coming of age in the south. However when Beatty opened the envelope, he stalled for a bit before Dunaway announced that the winner was the Emma Stone and Ryan Gosling hit movie musical, La La Land.

Things only grew more awkward from there, as the La La Land cast and creators joyfully took the stage only to find they weren’t supposed to be there. On live TV the screw-up was sorted out and the Moonlight folks accepted their awards, looking pretty dazed at such a weird turn of events.

WATCH: Moment where crew/cast of 'La La Land' realizes a mistake had been made and 'Moonlight' actually won Best Picture. #Oscars pic.twitter.com/WCCopwsJ66

To his credit Beatty attempted to explain what happened, and it’s clear in the video that he was uncertain as to what he was reading in the first place.

So the venerable movie star may not be the one to blame at all—he may have simply been given the wrong information.

This we know for sure: Moonlight was voted best picture of 2016, and heads are probably going to roll somewhere backstage at the Oscars.