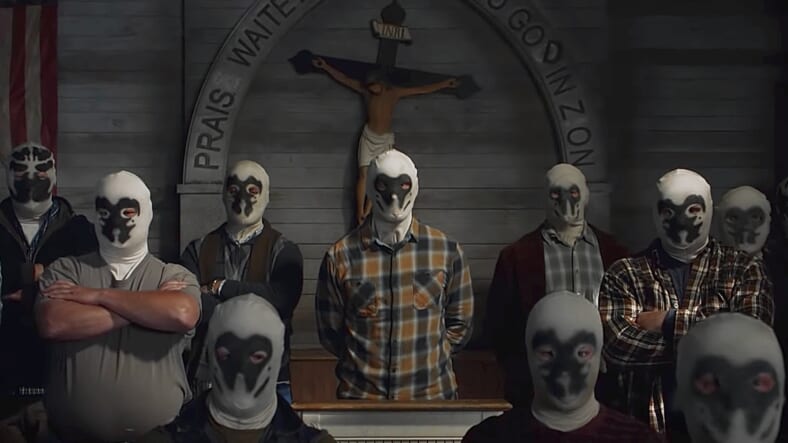 We don’t know when HBO’s Watchmen will be released and Game of Thrones is sucking all the air out of the room anyway. But this new trailer for the Damon Lindelof series—based on Alan Moore’s popular graphic novel—will definitely prompt some interest in finding out.

Because simply put, this looks seriously intense. We even get Don Johnson in a cowboy hat.

The trailer begins with a room full of men wearing the masks similar to the one sported by Rohrschach, the grim vigilante who acts as the narrator of some of the most interesting parts of the Moore original. It’s a church-like setting, and that’s clearly intentional. From there we see quick, intimidating glimpses of the alternate timeline in which this story takes place.

In the Watchmen universe superheroes are considered outlaws and for good reason. The plot of Moore’s novel only underscores this, after one of them causes a bizarre disaster that devastates New York. It appears that this series will jump ahead from the 1980s in which the book was set to a period analogous to today.

Other than that, we don’t know precisely what’s happening in the plot.

We’ll just have to be ready to find out when Watchmen debuts later in 2019. Until then, it’s like the masked men in the trailer say: “Tick-tock.”