“Ascension” was the famed magician’s first stunt in a decade. 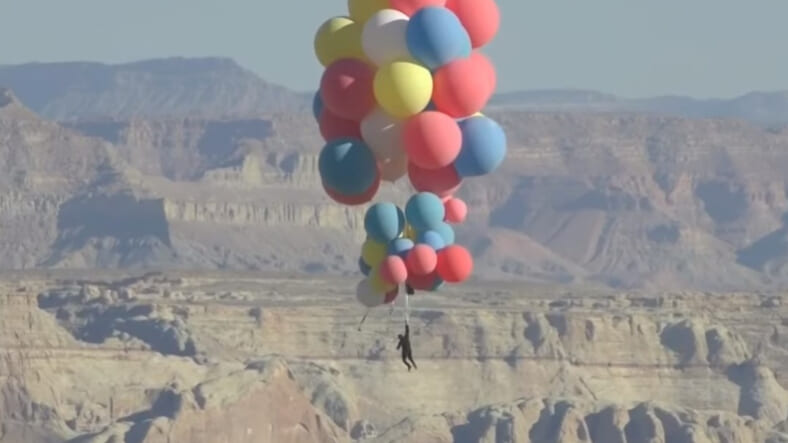 Magician, illusionist and extreme performer David Blaine’s latest “Ascension” stunt went off without a hitch, as he soared thousands of feet into the Arizona sky while holding a cluster of 52 helium balloons before skydiving back to Earth.

The mind-bending feat was the pinnacle of a nearly three-hour special that streamed live on YouTube, but the Independent posted a two-minute video of highlights—watch that above.

After taking off, Blaine strapped on his the parachute at 8,200 feet. He had told the New York Post that the goal was to reach an altitude of 18,000 feet, but the 47-year-old actually rose to 24,900 feet before commencing an adrenaline-pumping descent.

“Woooooo!” Blaine screamed as he dropped back to the ground. At around 7,000 feet, he released his parachute.

“That was great! Wow! You did it! You didn’t fall!,” his 9-year-old daughter Dessa told Blaine over the radio. “This was all for you, I love you,” Blaine replied.

In preparation for his first major stunt in 10 years, Blaine performed 500 airplane jumps, earned a hot air balloon license and learned to read wind patterns. Blaine faced threats of hypothermia and hypoxia due to cold temperatures and low levels of oxygen at high altitudes, in addition to the obvious danger crashing into the ground if the parachute failed.

“Every single stunt that I’ve ever done is about endurance and pushing past what I thought would be possible,” Blaine said in a video before the performance. “I can’t imagine that many people would dream of doing it.”

Watch Ascension in its entirety here: