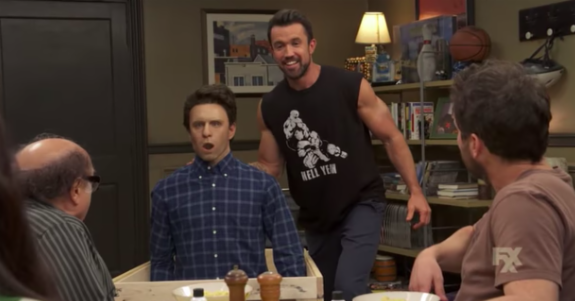 Things are getting weird for the crew from Paddy’s Pub.

FX just dropped the first trailer for season 13 — yes, one three — of the totally depraved, absolutely hilarious It’s Always Sunny in Philadelphia. And it looks like this could be the nuttiest one yet.

Here’s a lowdown on what, exactly, is happening, per Deadline:

Along with Rob McElhenney’s incredibly buff new body – yes, this is the same guy who gained a ton a few seasons back just for some “Fat Mac” laughs – the new trailer includes footage of the buzzed-about Dennis sex doll that apparently will stand in on occasion for Glenn Howerton, the actor (and Sunny co-creator) whose NBC sitcom A.P. Bio has been renewed for a second season. (The character – not the doll – is expected to appear in more than half of the new episodes).

Some other things we learn in the trailer: Dee (Kaitlin Olson) may or may not support Time’s Up (she enters a sexual harassment seminar chanting the phrase and ready to party); Charlie (Charlie Day) does a wicked Kramer impression; and Frank (Danny DeVito) uses a glue gun and lemon juice to close up some gruesome facial wounds.

Got all that? Now, we did know that Rob McElhenney was no longer Fat Mac thanks to some recent shots of his ripped new physique…

So we’re happy to report that he’s staying that way.

I mean, who needs this guy?

The new season will premiere on Wednesday, September 5, at 10pm on FXX.