“I used to think that my life was a tragedy. But now I realize it’s a comedy.” 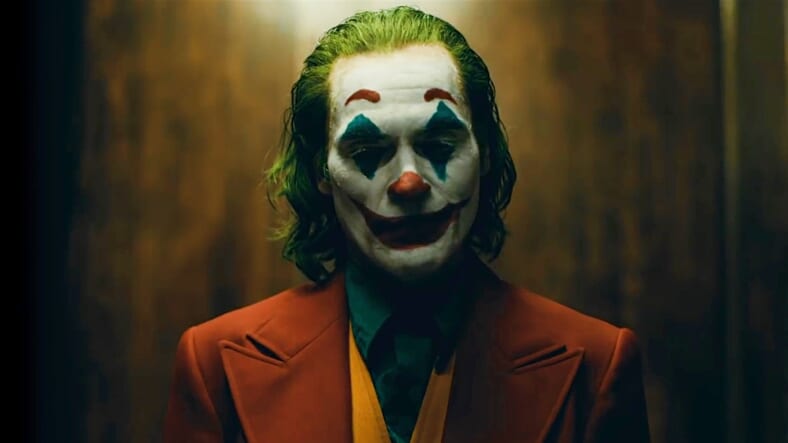 Warner Brothers has released the first official trailer for the upcoming Joaquin Phoenix Joker, and they are not playing around. Director Todd Phillips is going for broke with this one, and we may all be broken when we leave the theater, because this doesn’t look like an everyday comic book movie.

As Arthur Fleck, the man who would become Joker, it looks like Phoenix is coming right out of the Heath Ledger playbook and adding his own tortured spin.

So intense, you quickly forget this movie has anything to do with the DC Universe. Past DC movies—with the exception of Justice League—have been slammed as grim slogs. This could be something else altogether.

We may have even had a preview of just how quotable Phoenix’s Joker will be with the line heard in voiceover near the end: “I used to think that my life was a tragedy. But now I realize it’s a comedy.”

A poster released along with the trailer keeps that same dark, weird vibe… and it definitely leaves you wanting more.

Here’s the synopsis, per CBR:

Joker centers around the iconic arch-nemesis and is an original, standalone story not seen before on the big screen. The exploration of Arthur Fleck (Joaquin Phoenix), a man disregarded by society, is not only a gritty character study, but also a broader cautionary tale.

Fleck really is a man at the end of his tether, that’s obvious. Scary thin, he is victimized more than once in the new footage, and it suggests an unraveling that turns from desolation to a revelation that everything is funny once you truly just don’t care anymore.

That’s a hell of a solid premise for a movie about the Clown Prince of Crime.

We definitely want to see more of this skin-crawling new portrayal.

Joker will be released in theaters nationwide on October 4, 2019.