The amazing video has gone viral for a reason. 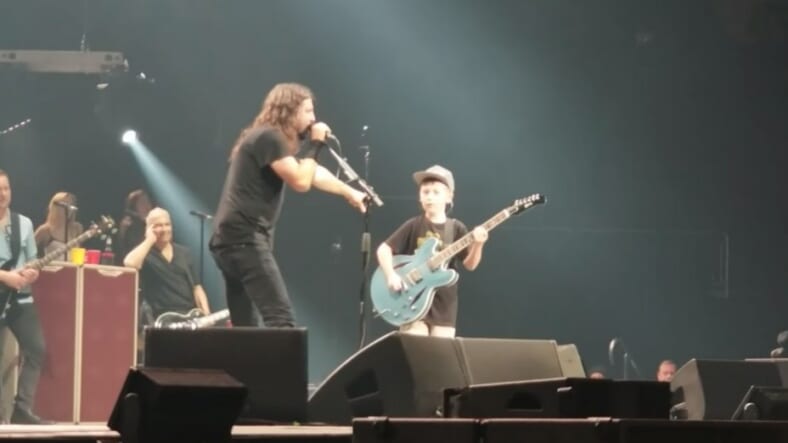 The Foo Fighters’ Dave Grohl has famously made a habit out of bringing lucky fans onstage to rock out with the band. There was the guy dressed as Gene Simmons from KISS who played “Monkey Wrench” in Austin. Before that, another fan got the play the same song onstage in Australia. Then there was the University of South Carolina student who Grohl had play drums on “Under Pressure”, and well, the list goes on.

The latest Foo Fighters fan invited onstage to jam was the youngest yet: a 10-year-old named Collier Cash Rule who absolutely stole the show Friday night at a concert in Kansas City Missouri.

When Grohl asked if he could play any instruments and new any songs, Rule advised that he not only plays guitar but he knows plenty of Metallica songs to the whoops of the crowd.

Pretty soon, video posted on YouTube above showed that Rule did a surprisingly rocking cover of “Enter Sandman” with Rule on lead, playing Grohl’s guitar, and Grohl singing the 1991 hit, Side note: Ever notice that Grohl looks a bit like Hetfield did back when he still had long hair in the early 90s?

Lookout world…Next generation of rockers coming soon to an arena near you! Thanks Collier! – Dave https://t.co/buHmM6VQHS

Anyways, Grohl and the rest of the Foos were so impressed by Rule, he was given Grohl’s guitar after the song ended, and gave Grohl a hug that might even bring a tear to your eye. And that was after young Collier played a little of “Welcome Home (Sanitarium)” as a bonus. Basically, this kid totally crushed his moment in the spotlight.

After the concert, Rule’s mother told KMBC News that her son had been playing for two years, and practices every day before and after school.

Watch the whole video above.