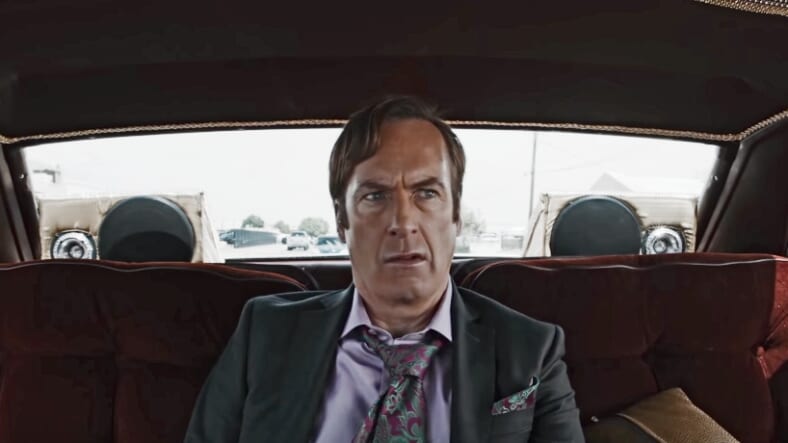 The end of season 4 of AMC’s hit Breaking Bad prequel Better Call Saul brought the beginning of Jimmy McGill’s transformation into the Saul Goodman fans of the first show know and love.

In “Joyride,” a new trailer released this weekend, McGill/Goodman (Bob Odenkirk) is riding in the back of a large old sedan that’s tricked out in the most intimidating way.

As the soundtrack sings about “Murder on my mind,” Slippin’ Jimmy notes a gun between the front seats and that the push buttons on the locks are gone. He’s trapped.

Then the car pulls into a desolate-looking truckyard and we’re out.

It’s a mere 30 seconds and yet it tells us a lot. For one thing, McGill/Goodman is wearing a flashy, Saul Goodman-style suit, meaning his transformation is well underway. For another, he hasn’t yet entirely established the blustery veneer that made the character a fan favorite on Breaking Bad, because he’s obviously, visibly terrified. And he is definitely already getting deeply involved in some dangerously sketchy stuff.

Unfortunately, parsing images is all we have right now as show creators Peter Gould and Vince Gilligan are masterful at hiding storylines from the public until their shows finally air (El Camino: A Breaking Bad Movie, which brought back Aaron Paul as Jesse Pinkman, is just the latest, best example of that).

We can, however, say with a lot of assurance that we’ll definitely be meeting Saul Goodman again when the next season premieres on February 23, 2020.