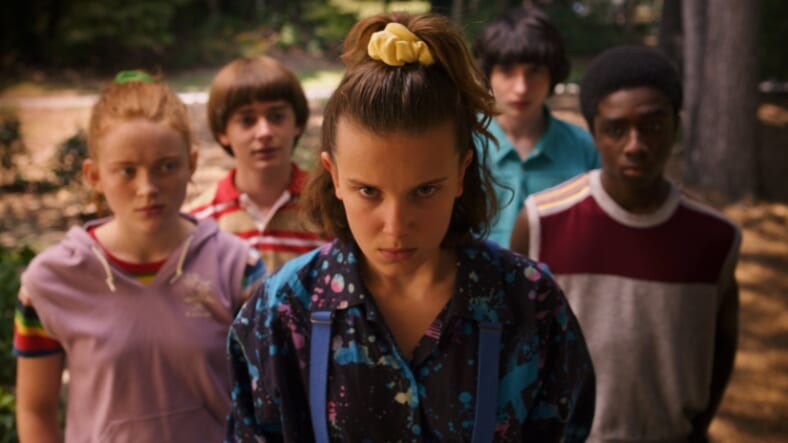 By now it’s well-known that the novel coronavirus pandemic hit Hollywood just as hard as the rest of the world, resulting in multiple production delays and the loss of billions of dollars in potential profit. Those delays included the fourth season of Stranger Things.

Watch an intriguing preview of the show’s next outing above — it returns us to the lab where Millie Bobby Brown’s “Eleven” was imprisoned while a shady government agency studied her paranormal abilities, and hints that she’s in trouble — again.

The series resumed shooting in the Fall of 2020, and according to producer Shawn Levy that was a good thing.

From Collider, here’s Levy’s explanation of how delaying production was a good thing for series creators and writers the Duffer brothers:

I’ll just say the pandemic definitely massively delayed shooting and therefore the launch of our current Season 4, date still TBD. But it impacted very positively by allowing the Duffer brothers, for the first time ever, to write the entire season before we shoot it and to have time to rewrite in a way that they rarely had before so the quality of these screenplays are exceptional, maybe better than ever.

Stranger Things has flaws — story threads that get dropped, changes in basic character motivations — but it has been a huge hit for Netflix in part because it’s such a unique combo of satisfying overall narrative and well-cast, compelling actors like Millie Bobby Brown and her character’s protector, David K. Harbour’s complex and intriguing Sheriff Jim Hopper.

Producer Levy may have just been playing dutiful hype man but with this new teaser and perhaps a need (still) for the kind of thorough escape Stranger Things can provide, the future of the show still looks extremely promising.

No exact date for the show’s release has been set. It’s expected to hit Netflix sometime in 2022.