Does Dwight Schrute choose the red pill or the blue pill? 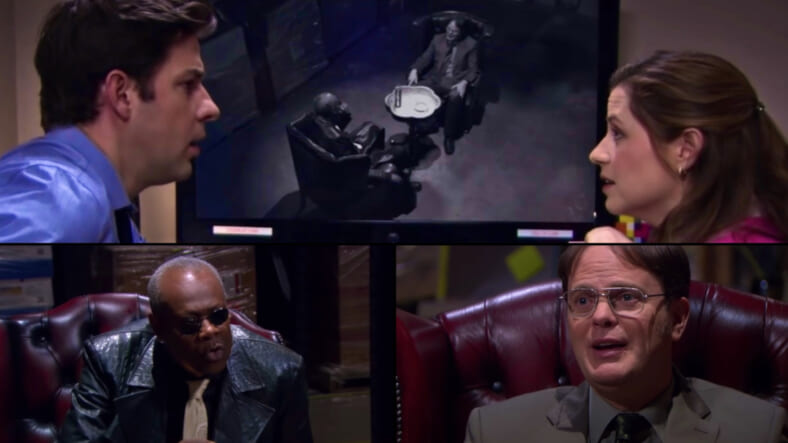 During the novel coronavirus pandemic, NBC’s iconic mockumentary comedy The Office has become a kind of binge-watching comfort food for many, including younger viewers who were just in grade school when the show’s last season aired in 2013. The popularity of Office-related “reaction GIFs” online, as well as the appetite for extra footage that didn’t make the original series, is huge.

So NBC knew what it was doing by advertising the series move from Netflix to its Peacock streaming platform with a Matrix-themed “cold open” (comedy segment at the beginning often unrelated to the rest of the show) that never aired.

As the Washington Post noted in June 2020, The Office has long “been one of the most-streamed television shows on Netflix.” The Post continues:

Although the nine-season TV series has been off the air since 2013, it has found a second life through the popular streaming service, connecting with young first-time viewers who have rejuvenated its online pop-cultural relevance. That notably hasn’t changed during the pandemic. In a recent Nielsen study, which surveyed streaming service viewership from March 9 to 15, “The Office” exceeded all TV shows with 1.23 billion minutes watched, excluding mobile and PC devices. With fear spiking and the crisis throwing many into economic uncertainty, “The Office” has remained the primary comedy currency for navigating life during the pandemic, a binge-watching balm for those looking to alleviate their social isolation.

Of course, The Matrix trilogy (soon to become a quadrilogy) has also been a hit with home viewers since it premiered in theaters in 1999, and if there was ever an Office character who would believe the Matrix might be real, it was Rainn Wilson’s Dwight Schrute.

So in the cold open, Jim (John Krasinski) and Pam (Jenna Fischer) collaborate with the Dunder Mifflin security guy Hank (late character actor Hugh Dane) as well as others to reenact one of the early scenes in The Matrix with Dwight playing the unwitting Keanu Reeves character of Tom Anderson/Neo.

Dwight, a hardcore nerd familiar with all things sci-fi and fantasy, falls right into the trap and ends up seated in the warehouse with Hank, who claims he is Morpheus’s (Laurence Fishburne) brother “Dorpheus.”

“Dorpheus” ultimately presents Dwight with the red pill and blue pill. Just as in the movie, Dwight is told red will take him deeper into the Matrix but the blue pill will leave him in life as he knows it.

If you have yet to watch we won’t spoil the choice, but it’s unexpected and to Jenna Fischer’s Pam, surprisingly touching.

The Office—the entire series as well as features like this clip which were previously reserved for DVD packages—is now available to stream on Peacock.

The Matrix is available on Amazon Prime.