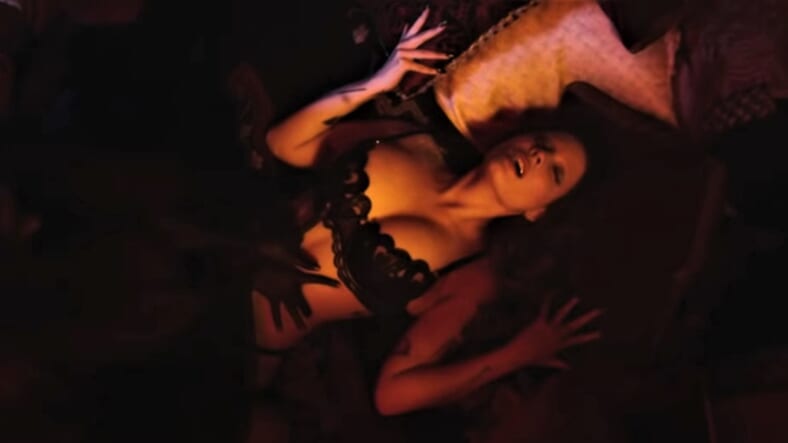 Following the reveal of NSFW album art and interest-piquing Instagram commentary, the hype around Halsey’s If I Can’t Have Love, I Want Power continues with a cinematic trailer advertising the upcoming concept album’s accompanying IMAX movie.

The outspoken pop star and mother-to-be previously described the LP’s Renaissance-inspired cover as a “dichotomy of Madonna and the Whore,” a theme that is seemingly further explored in the “woman/god” trailer. Images of a lingerie-clad Halsey are juxtaposed with a nightmarish sequence of her pregnant belly being beaten and a white-eyed demonic visitor, among other disturbing scenes.

The soundtrack features music from the upcoming release, which was produced Nine Inch Nails legend Trent Reznor and his longtime collaborator Atticus Ross. Their influence sounds especially obvious in the NIN-style pulsing synth and mode-shifting counter melody behind Halsey’s vocals, but the pop star penned all of the songs.

“The idea that me as a sexual being and my body as a vessel and gift to my child are two concepts that can co-exist peacefully and powerfully,” Halsey further explained on Instagram when the cover art was revealed.

“My body has belonged to the world in many different ways the past few years, and this image is my means of reclaiming my autonomy and establishing my pride and strength as a life force for my human being.”

Tickets to the If I Can’t Have Love, I Want Power IMAX movie go on sale August 3 ahead of the album’s August 27 release. Click here to see all screening locations.