It’s all in the hips. 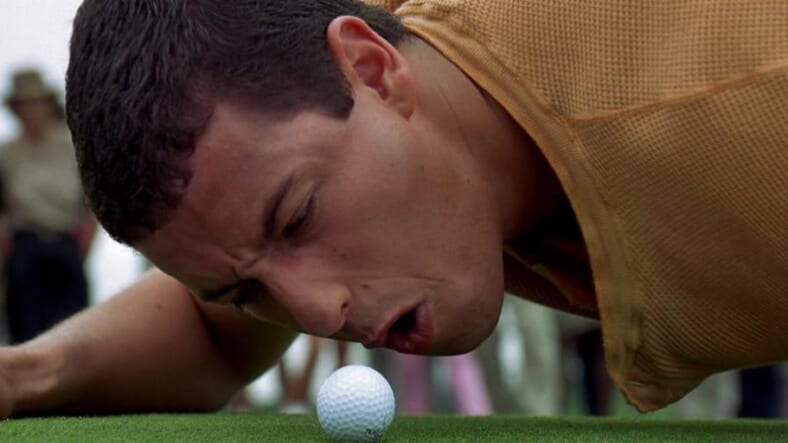 In the seldom successfully merged worlds of pro golf and comedy 2021 has been a special year: Happy Gilmore, Adam Sandler‘s tale of a failed hockey player who takes his rage and crazy swinging style into golf has been celebrating its Silver Jubilee.

That’s a silly way to refer to the 25th anniversary of Happy’s premiere in February 1996, but it reads better than “quadrancentennial.” Anyway—pro golfers everywhere seem to really love the movie so there have been numerous tributes, including the video above, which features Tiger Woods, Dustin Johnson, Rory McIlroy, Collin Morikawa, Matthew Wolff, and Tommy Fleetwood going for broke with their own versions of Happy’s legendarily ridiculous swing.

These are all PGA Tour pros and sponsored by golf gear giant TaylorMade, and admirably, they mostly really go for it.

Tiger Woods doesn’t necessarily do it exactly like Sandler’s iconic character, but he puts the kind of English only a true pro golf prodigy like him can muster on the ball and his drive is damn impressive.

Dustin Johnson, however, does a perfect impression—but his drive doesn’t really have the reach that Tiger’s does.

All in all the pros look like they’re having a lot of fun. It’s unclear when the video was actually made—Tiger Woods has been in recovery since February from a car crash that caused severe injuries to his right leg and according to an August 12, 2021 article in People magazine, “has not been able to play any golf.”

Adam Sandler is a comedian and—in the last couple of years in particular—has been revealed to be a gifted actor, but it’s hard to argue with the fact that for a non-golf pro he is still the guy to beat when it comes to ridiculous golf swings.

Happy loves you all! Thanks for everything! pic.twitter.com/p1aY9JcFWh

Sandler proved this back in February when he tweeted a video of himself marking the movie’s 25th anniversary with the swing then called out Happy’s nemesis from the film, Shooter McGavin.

At that time, actor Christopher McDonald responded in character as McGavin, prompting talk of a Happy Gilmore 2—and Sandler later indicated that a sequel is a real possibility.

Based on the video of current leading golfers paying tribute to the character, it looks like any sequel will have more than enough pros available for cameos.