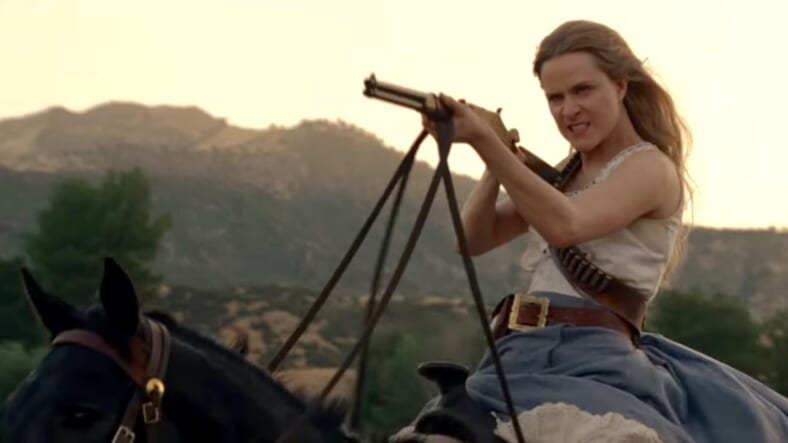 Details about Season 2 of Westworld have been as tightly guarded as the Iron Throne (oops, wrong HBO show!)

Ahead of its April 22nd premiere and after a splashy new trailer that aired during the Super Bowl, the show’s gate keepers are revealing new images and plot points from the upcoming season.

Entertainment Weekly also teased there may be a second theme park introduced in the second season. Due to a glimpse of a room of training samurai at the end of the first season, which was labeled “SW,” many fans believed a “Samurai World” could be coming.

EW reports “SW” actually stands for “Shogun World,” which is a reference to ancient Japanese feudal military order. But it is still unsure of whether or not any of the second season will take place inside it.

Now whether we’ll actually see this park in season 2 — or any of the other five Delos Incorporated-owned theme parks besides Westworld — is not yet known. But HBO’s social media campaign teased “Park 2” earlier this month with this image which might, or might not, represent a region in a simulated version of Japan.

Judging by the brewing fan enthusiasm on Twitter, HBO would disappoint millions if at least a sliver of the new season did not take place in “Shogun World.”

Thankfully, the casting list on IMDB appears to back up that Shogun World will be a prominent feature of the second season.

If you hadn’t caught the first season, which received widespread acclaim and an instant fanbase, here is a synopsis from IMDB:

Westworld isn’t your typical amusement park. Intended for rich vacationers, the futuristic park allows its visitors to live out their most primal fantasies with the robotic “hosts.” However, the robotic hosts have evolved an artificial consciousness that is similar to, yet diverges from, human consciousness.

No matter how illicit the fantasy may be, there are no consequences for the park’s guests, allowing for any wish to be indulged; but there is a price to be paid.

Season 2 of Westworld debuts on HBO on April 22nd.