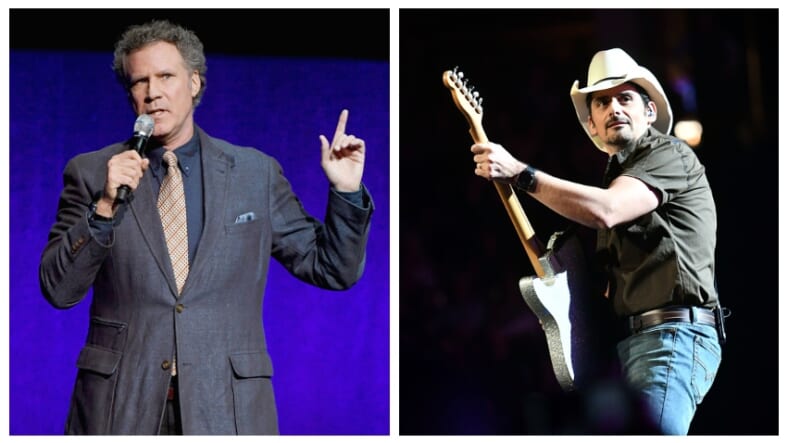 Brad Paisley apparently has an estranged older brother named Gary Paisley, and Gary looks a LOT like Will Ferrell in a bad wig.

Actually he is Will Ferrell, the straight-faced king of random comedy. Saturday, he crashed Paisley’s set at a charity concert and basically took over.

Paisley posted a pic from the event on his Instagram with the caption: “Last night, my older brother Gary Paisley made a rare appearance…he’s a little off.”

Last night, my older brother Gary Paisley made a rare appearance…he’s a little off. #willferrell #cancerforcollege

The audience loved it, though. Ferrell had a beer in one hand and he took the mic with the other and growled, “Thanks, Brad for not leaving me a ticket tonight. But I got in anyway. Anyway, that’s my younger brother. Despite our estrangement, I’m still really proud of him. He never lets me sing a song, but whatever.”

Ferrell and Paisley then performed a surprisingly scorching cover of “Hot for Teacher” with Guns N’ Roses’ bassist Duff McKagan, Red Hot Chili Peppers drummer—and Will Ferrell lookalike—Chad Smith on the drums. Check it out:

The whole goofy thing was for a good cause, though—Will Ferrell’s charity, www.cancerforcollege.org.

If we have to put up with five minutes of Will Ferrell shirtless to help cancer survivors, it’s probably worth it.