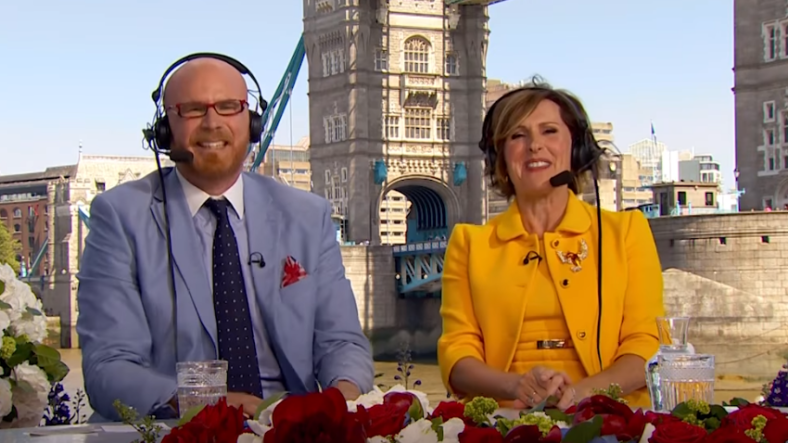 Most of the media covering the Royal Wedding between Prince Harry and American actress Meghan Markle ranged from gushing to wonky. That meant everything from American journalists in fascinators waving manically at coaches to various British experts giving droning mini-lessons on the history of the monarchy.

Then there was HBO’s coverage.

In The Royal Wedding Live with Cord and Tish! Will Ferrell’s Cord Hosenbeck and Molly Shannon as Tish Cattigan delivered improv comedy based on the festivities—very funny improv, as you might expect from comedy vets who got their start on Saturday Night Live.

HBO tweeted a clip of one of the funniest moments, in which Cord and Tish lose their damn minds over the Harry and Meghan’s kiss on the steps of the cathedral, Cord calling it “one small kiss for man, one giant kiss for mankind.”

It was funny in part because it was one of the few times they actually just watched the wedding. Otherwise they provided top-notch commentary about the Queen’s Hyundai and how this was the first time an American woman and British man had married since Gwyneth Paltrow married “Coldcuts” lead singer Chris Martin.

That was just one great moment. Some more below.

ICYMI: An encore of The Royal Wedding Live with Cord and Tish! airs tonight at 9:45PM. pic.twitter.com/KeZqmVXYUd

The crown jewels: will their mystery ever be solved? #RoyalWedding #CordAndTish pic.twitter.com/dh1Zf1QrOy

When Cord and Tish provided similar commentary on the Rose Bowl Parade, some viewers were put out because they didn’t realize it was improv. That wasn’t a problem this time.

It wouldn’t be in the future, either. Now we just want Cord and Tish to comment on everything.