Things get ugly on and off the court in Bart Freundlich’s high school sports drama. 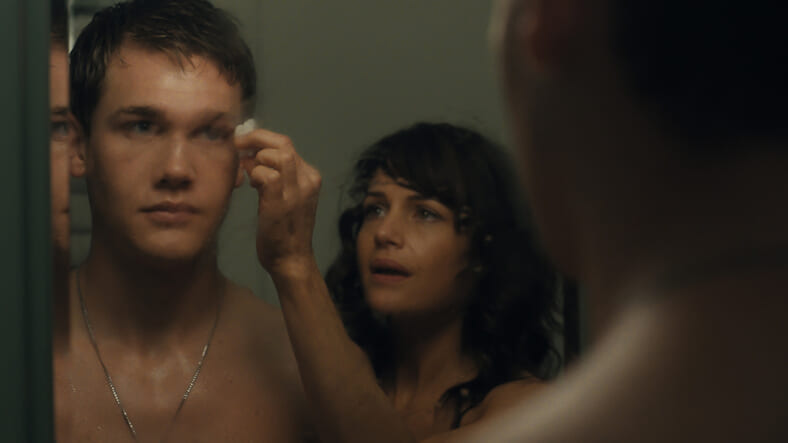 In Michael Shannon’s world, there are no wolves in sheep’s clothing.In Wolves, Bart Freundlich’s high school sports drama that premiered at the 2016 Tribeca Film Festival this week, it’s clear early on who the heroes and villains are, and while there’s arguably one moderately unexpected story development, no one changes all that much — they just become more heightened versions of the characters we meet in the first act. The film is fairly paint-by-numbers and mostly predictable, but a standout performance from Shannon as the drunk, gambling-addicted father of a high school basketball star and an impressive turn from the always-welcome, always-gorgeous Carla Gugino will help position Wolves for a decently widespread theatrical release, though it probably won’t have much staying power.

Hoop Dreams this is not, but Wolves is still worth a watch.

Taylor John Smith (American Crime) is Anthony Keller, the great white hope of his high school basketball team and his parents, whose shortcomings and frustrated dreams do not prevent them from recognizing the great kid they have somehow managed to raise on and off the court. Shannon’s Lee Keller is a not-very-well established novelist who drinks too much and writes too little; his primary sources of income are a creative writing teaching gig at a Manhattan commuter college and the occasional stroke of luck on sports betting. But that habit is funded primarily from a modest savings account intended for Anthony’s enrollment at Cornell University the next year — fingers crossed. Anthony is a very big fish in the small pond of St. Anthony’s preparatory school, where he’s referred to simply as “Saint,” and while his talent on the court is undeniable, his game could be stronger if he was willing to throw a few more elbows. As a Cornell recruiter says during a campus visit, “I’m not looking for someone who will fit in. I’m looking for someone who will stand out.”

Anthony’s mother (Gugino) is more interested in keeping some semblance of normalcy at home than facing the reality of why things at home are far from normal. She has a steady job at a high-end clothing boutique in the city, but clearly had greater ambitions than selling clothes. But where another woman might be bitter, Mrs. Keller (who may or may not have been given a first name in the movie; if so, I can’t recall it) has long committed herself to looking on the bright side, even when doing so requires her to turn a blind eye to her husband’s destructiveness. Still, everyone has a breaking point, and Lee Keller is hell-bent on finding it.

Wolves makes no bones about being a predictable movie, but the ways in which that predictableness is realized give the story high stakes in a “is this really happening?! Yes of course it is” fashion. Smith isn’t given a lot to work with dialogue-wise as he’s cast as the frustratingly silent type, and he’s better able to convey his character’s seething frustration when he’s in uniform. (If there’s an acting coach who specializes in fine-tuning flared nostrils for a more convincing effect, Wolves could have used one.)

Freundlich’s fluency with New York City (he’s a longtime resident) makes Wolves a fitting Tribeca debut. He’s also clearly well-versed on the game of basketball, or at least how the game has been played on the big screen so many times before. All told, Wolves is an engaging, slightly disorienting and not particularly memorable story about what it takes to win when the ball is not in your court.