We Spent a Day Working at Guy Fieri’s Times Square Restaurant, And Have the Donkey Sauce Stains to Prove It

With the news that Guy’s American Kitchen & Bar is closing, we look back at our apprenticeship with the spiked one. 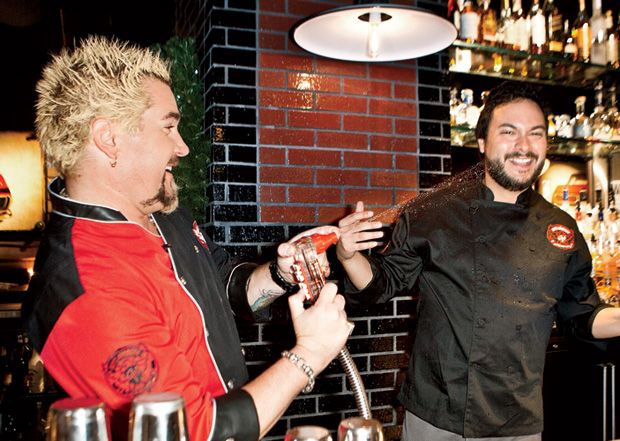 Photographed for Maxim by Ben Ritter

Five years ago, Maxim sent editor Patrick Carone to Guy Fieri’s then-new Times Square restaurant to see if he could survive a day cooking, bartending, and waiting tables under the tutelage of the Food Network star himself. With the news that Guy’s American Kitchen & Bar is now closing, we’re taking a look back at this grease-fueled experience. Was Patrick, who had never done a lick of real work in his life, able to make it to quitting time? Don’t bet your Donkey Sauce.

Guy Fieri screams at me as I attempt to flatten a wad of meat on a sizzling hot grill. “Use some of that forearm strength!” I’m sweating balls in a 100-plus-degree kitchen during the lunch rush at Guy’s American Kitchen & Bar. I came to learn what it takes to work the grill, man the bar, and wait the tables, and judging by how things are going so far, it’s probably for the best that my real job primarily consists of sitting at a computer staring at women all day. The spatula I’m using drops to the floor as I wipe away the sweat that’s stinging my eyeballs. Today is not going to be easy.

Despite an over-the-top nasty review in The New York Times that went viral (Guy told the Today show he thinks the reviewer was just trying to make a name for himself), the place is packed on this Tuesday afternoon. It’s the seventh restaurant owned by the California-bred celebrity chef and his first on the East Coast.

Though known mostly for stuffing his face with other people’s grub on his Food Network smash hit Diners, Drive-Ins and Dives, Guy has been cooking since he was a kid and working in restaurants since he was a teenager. “If everyone knew what it’s like to work in a restaurant,” he tells me, “they wouldn’t be such asses about what goes on out front.” After two minutes in the hot-as-the-devil’s-grundle sauté station, I understand exactly what he means.

It’s 10am, and executive chef Ken Hoerle—a Bruce Willis look-alike, complete with shaved head and no-nonsense demeanor—is giving me a tour of the two kitchens: prep and main. As we walk around the subterranean prep kitchen, the “heart of the restaurant,” according to Ken, a dozen extremely focused men cut up veggies, boil pork shanks, pound slabs of beef, and season whole chickens. As the chef points out the dairy fridge, the sauce cooler, the dish-washing room, and the pastry-prep area, I feel like Danny in The Shining getting a tour of the Overlook Hotel kitchen. (“How would you like some ice cream, Doc?”)

Absolutely nothing goes to waste, I’m told. The scraps from the hanger steak are used to make the jus for the Big Dipper sandwich; the rotisserie chickens get chopped up for the Chinatown Chicken Crunch salad. “In any kitchen,” Ken explains, “you want everything to be utilized. It’s part of making money.”

If efficient use of ingredients is necessary in a kitchen, efficient use of time is even more so. Designed to minimize the passing of foodstuffs—thereby cutting down on chatter between staff—the kitchen’s main thoroughfare consists of the salad station, the griddle station, the fry station, the ovens around the corner, and, finally, the sauté station. “This is the hottest place in the kitchen,” Ken says, somewhat unnecessarily. “We put our more skilled guys in this area.” I’m quickly ushered away.

Back around the corner—where it’s only slightly less unbearably hot—Ken teaches me how to make two items: the Sashimi Tacos and the Big Bite Burger. The first dish requires a delicate touch as I place raw tuna and mango salsa into four quick-to-crack shells. (Several shattered on my watch.) I drizzle two different sauces over the tacos, then top the whole thing off with sliced scallions. Ken tells me to take a bite, and they taste just as good as they look. Score!

Next is the burger, which isn’t quite so easy. Besides the multitude of ingredients (raw onions, pickles, lettuce, tomatoes, melted cheese, toasted bun, onion ring, and Donkey Sauce), the fact that the dish actually has to be, you know, cooked adds a whole new element. I pay close attention to Ken, take careful notes, and think I’m ready to give it a shot when—like a pierced and goateed Tasmanian devil—Guy bursts into the kitchen. Oh, crap.

“Well, let’s see you make a burger,” he says, and I instantly forget every step involved. Not only do I have trouble pressing on the patty correctly, but I also totally blank on the specific way to add each ingredient. “No, it’s Donkey Sauce first, then the pickles!” “That’s way too many onions!” “That’s not enough lettuce!” Now I’m really starting to sweat, due to my nerves as well as the extreme heat. Remembering that Ken put a metal bowl over the burgers and steamed them for a few seconds (it adds to the juiciness), I grab a pan full of water and toss it at the sizzling burger. “You’re not putting out a fire, man. Watch out!”

When the steam disappears and the burger is done, Guy is ready to grade me on my kitchen performance. “Not great,” he says. “Your ideas are right, but you’re slow. If you got another 24 hours under your belt working the burger station, that maybe would get you through the flattop. But then you’d have six other stations to master. You get a B-minus for the kitchen.”

I look around at the line cooks who work ungodly hours in this crazy, hot, intense place day and night and realize I’ll never look at my plate of food at a restaurant the same way again.

The cocktails at Guy’s American are as important as the food. Potent, multicolored drinks like the Rockin’ Red Mojito and the Blackberry Brandy Alexander are just a couple of the forms of hooch that aim to make your experience at Guy’s a memorable—or perhaps forgettable—one. Lording over the bar, which is prominently placed in the center dining room, is the restaurant’s beverage director, a jovial bro named Carey Martin. A clear fan of all things drinkable, his job is to ensure the booze flows freely at all times. But right now his job is to teach someone who doesn’t know what goes into a gin and tonic how to pour like a pro.

“You gotta remember, the drinks are strong at Guy’s,” Carey tells me as he counts “one one-thousand, two one-thousand, three one-thousand” while pouring tequila into a cocktail shaker. That’s my first lesson: Each “one thousand” translates to about half an ounce of booze. This is vital information, since good cocktails are all about correct proportions. He’s showing me how to make a Caliente Margarita—a spicy combo of jalapeño-infused tequila, triple sec, cilantro, lime juice, jalapeños, and agave nectar—and I jump right into it. I’m muddling! I’m shaking! I’m moving like Tom Cruise in Cocktail!

Carey looks impressed, but he’s not convinced until he takes a sip. “This is the most important thing I want you to take away: Sample the finished drink.” He sticks in a straw—covering the top with his thumb—takes a slurp, and gives me an approving nod. Unfortunately, Carey isn’t the one grading me.Of course, when it comes time to make a Caliente Margarita for Guy, I fill the cocktail shaker with mint instead of cilantro. “When in doubt, smell it out,” he reprimands. Count on Guy Fieri to have a catchy rhyme for any given situation. Without missing a beat, I dump out the shaker, throw in some more ice, and add the cilantro. As I pour in the tequila, Guy tells me to hold it for an extra “me one-thousand,” because he wants this puppy to be strong. He quizzes me with each step. “What’s triple sec?” “What’s agave?” “What happens if you shake it too long?” Shocking everyone involved, I answer everything correctly. (Or close enough.)

But this isn’t that kind of test; Guy needs to taste what I have made. He takes two big sips and looks me right in the eye. “Not bad. Good guest service, nice style, and good recipe adherence. In your bartending course, you receive…an A.” Drinking away half my life has finally paid off!

If there’s one thing that anyone who has never waited tables (like me) can’t stand, it’s listening to people yap about that one month in college that they worked at the local diner. Well, this was my chance to shut them up. I meet Raquel, an aspiring actress and server who is willing to risk her hard-earned tips by letting me help out with one of her tables. She gives me a few pointers right off the bat: “Be charismatic. Ask them where they’re from—this is Times Square, so everyone is a tourist. Only offer suggestions if they ask.” I take it all in.

We approach a young couple visiting from Canada, and I watch Raquel do her thing. She’s a pro, so I feel comfortable piping in and suggesting the California Egg Rolls when they ask what we like. As we walk away, I ask Raquel if she can tell what type of tip this couple is going to leave. “You never know. Sometimes people you’ve been laughing with the whole time leave almost nothing. Other times a super-rude table will leave you more than you can ever imagine.” Luckily for Raquel, these friendly Canucks leave an extra-friendly 25 percent. Oh, Canada, indeed. On to my final test…

Serving Guy Fieri at a restaurant named Guy’s American Kitchen & Bar is as intimidating as it sounds. He sits twiddling his thumbs, annoyed that no one has greeted him yet. I rush over and hand him a food and drink menu, and he immediately starts asking me about various items. Not surprisingly, he asks about the restaurant’s most complicated dish: “How is the General Tso’s Pork Shank made, exactly?” I launch right into it: “First, we make sure that the pork is perfectly cooked. It boils in a stock for a few hours, then we put it in the oven, deep-fry it, and bathe it in our General Tso’s glaze. It’s juicy, tangy, and fall-off-the-bone tender.” It’s a mouthful, but I think I nail it.

When the food arrives, Guy invites me to sit and join him. As we scarf down half the menu (I’m pretty sure our forks touch in a bowl of fettuccine), he gives me the rundown: “Your approach to the table was very nice, and you had great recommendations. But it was your enthusiasm about the pork shank that sold it. Even if I were vegetarian, I would have tried it.” I smile as I stuff a burger into my mouth. “You get an A in service,” he says.

I finish the day with two A’s and a B-minus—higher than a 3.0 GPA, which is better than I ever got in college. As Guy and I finish our meal, I thank him for giving me the opportunity to work at his restaurant. “My pleasure,” he says. “By the way, wanna know how I came up with the Sashimi Tacos? I was drinking tequila at 9am with Sammy Hagar, and…”