The ‘X-Files’ Reboot Isn’t Great, But It Is Good Enough 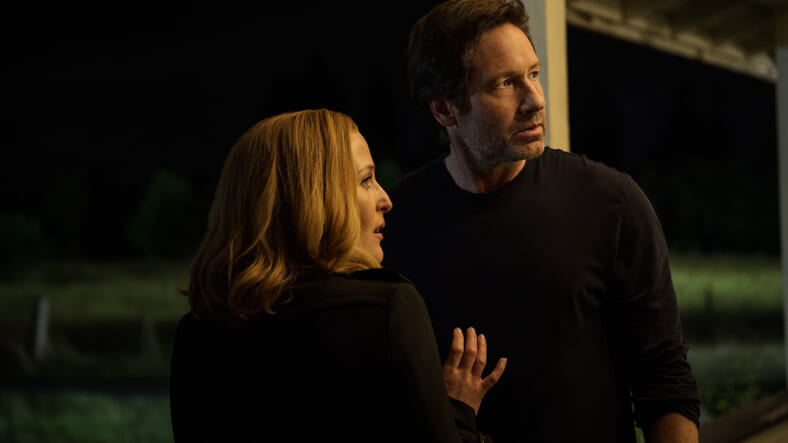 From the opening scenes of Fox’s X-Files reboot, it’s hard not to wonder if the six-episode run is some sort of spoof — a campy extension of Gillian Anderson and David Duchovny’s toothy, endearing, late-night TV interview chemistry, buffeted by nostalgia and immeasurably high expectations. The stakes seem a little forced, the veterans a little too grizzled; it makes no attempt to hide the fact that picking up where you left off isn’t always seamless.

But fans of the original run can breathe easy. Fox’s limited series revival of The X-Files is far from perfect, but it’s engaging and exactly what X-Files fans want: equal parts humor and drama, lots of creatures that go bump in the night, and plenty of Mulder and Scully yearning for each other.

From the start, things feel different. A world-weary Mulder gives a four-minute voiceover that, while helpful in giving new viewers a quick and dirty backstory, sets a low-energy tone for much of the erratic, exposition-heavy episode. The show reunites Mulder, who’s been staying out of sight since splitting up with his better half, and Scully, who’s working as a doctor in Washington, D.C., and drops them back into the extraterrestrial story arc we followed for nine seasons.

But both Duchovny and Anderson are playing Mulder and Scully at full blast — not nearly as effortlessly as they once used to. Anderson’s over-pronunciation of “Mul-der!” while cocking her head to the side and scolding her erstwhile partner could have been dialed back 50% and new viewers would still have known Scully was the mature half of that relationship. Mulder’s obsessive paranoia is apparent from Duchovny’s radiating intensity alone; the spliced found-footage video clips that conjure up images of tinfoil hat truthers that he used to sell his theory in the first episode felt beyond the pale, even for Spooky Mulder.

Luckily, Anderson and Duchovny’s chemistry is as winning as ever — no surprise there — and the pair carry the series, even at its most erratic. In the first three episodes, the show does little with its many canons, opting to stay procedural heavy, yet it swings wildly between various episode types, making the show feel jarringly disjointed from episode to episode. While the opener delves slightly in the show’s mythology, the second episode goes classic X-Files, forcing viewers to contend with monsters both real and reflective of society’s most pressing philosophical questions. The third veers sharply to the left, a comedic episode that will feel familiar to longtime viewers used to X-Files writer Darin Morgan’s work, but sharply anachronistic for anyone who was expecting to see the paranormal Benson and Stabler come back together.

What’s working against the show the most is its format. The series wastes much of the first episode delving into a slow payoff backstory, when the second episode could easily have done the work of the first sans any of Mulder’s paranoid exposition. But even with its wildly shifting tone and erratic pacing, it’s very much the X-Files fans have come to love, with Chris Carter as well as longtime writers Darin Morgan and James Wong bringing their A-game to assemble the most authentic show possible.

The slow start will take some getting used to, and the campy feel of the comedic moments will take even more getting used to (take solace, at those times, in the continually superb acting of Gillian Anderson in any situation thrown at her), but Fox’s rebooted series does justice to its original in a way that should keep both old fans and new converts entertained. Would it hold up without decades of mythology behind it? Probably not. But the last 14 years should have done far more damage to the viability of a reboot of a series as beloved as the The X-Files — it succeeds, even when it falters. Just call it a time gap, Spooky Mulder.