Returning to the ‘Star Wars’ Universe, Yoda Is

Episode 9 just got a tiny green injection of awesome. 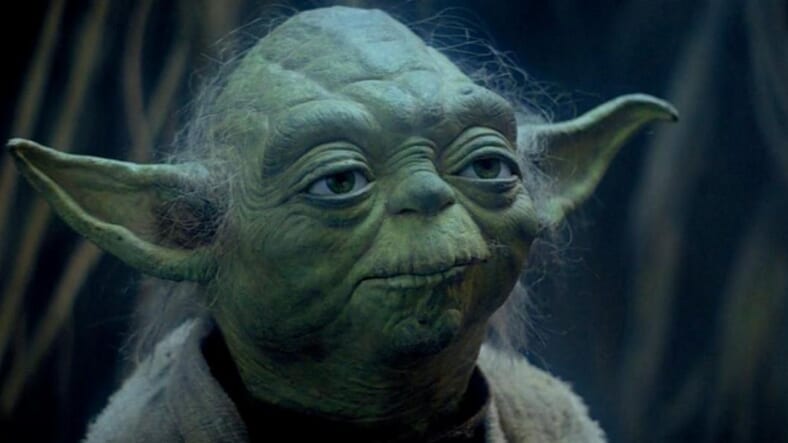 It’s been a crazy few days for us Star Wars nerds. First we find out, in the latest trailer for Solo: A Star Wars Story, that Chewbacca is 190 years old. And now we discover that O.G. Jedi Yoda is going to appear in Episode 9, set to warp into theaters in December, 2019.

The Daily News got the scoop:

“The success of the scenes featuring Yoda in ‘The Last Jedi’ were huge,” says our insider. If all goes according to plan, the sci-fi space sage will rejoin the series in spirit to mentor a young warrior played by British actress Daisy Ridley, we’re told.

“Yoda will again appear as a ghost as he acknowledges Rey’s success and growth as a Jedi,” we hear. “The scenes are due to be put together later this year.”

Yoda is appearing as a ghost in the sequels because he died (in a most dramatic fashion) in Episode VI: Return of the Jedi.

The News also learned that the late Carrie Fisher’s character, Princess Leia, will not be digitally revived for future films.

Fisher died in Dec. 2015, but appeared in Episode eight a year later, thanks to scenes that had already been filmed. Mark Hamill, who played Yoda’s prized student Luke Skywalker, told ABC News on Thursday that with Fisher gone and Harrison Ford’s Han Solo character having been killed off in 2016’s “The Force Awakens,” his enthusiasm for the series has waned.

“It really has tarnished my ability to enjoy it to its fullest,” said Hamill, whose mystical character was killed off in 2017’s “The Last Jedi,” but could also come back as a spirit. It doesn’t matter to him either way. “I don’t care anymore, on that level,” he confessed. “Because Han Solo is gone, Luke is gone.”

Wow, turns out Luke is whiny in real life too!

Now, please enjoy this clip of Yoda kicking Darth Sidious, aka Palpatine, aka the Emperor’s butt in this scene from Episode III: Revenge of the Sith.

Let’s hope Yoda’s ghost is (relatively) young and spry in the new flick.