This ‘Zit Burger’ Pops Like a Pimple, and It’s Freaking People the Hell Out 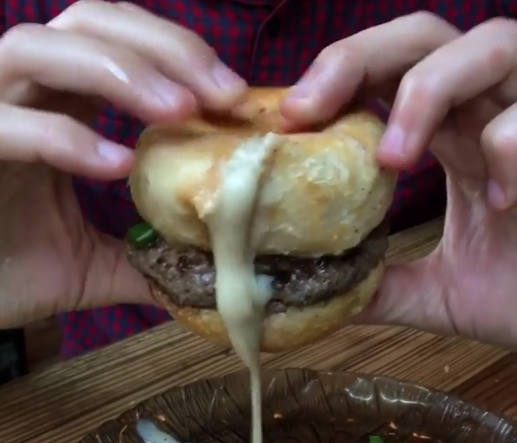 They say we eat with our eyes first. If that’s true, then this burger might have a bit of a problem.

But as many social media users have pointed out, that bun has all of the aesthetic appeal of a pubescent boy’s supercharged pimple on the brink of explosion.

🚨🚨🚨 WARNING 🚨🚨🚨 Mature audiences only. Watch @chefsandydee cut open this insane Burger Bomb at @raw_material_nyc. It may look disgusting and impractical, but it is delicious after the initial shock and a lot of napkins. Watch with sound on for more fun too. 🌋🍔 #rawmaterialnyc

Owner and chef at Raw Materials told Insider, “It’s kind of a surprise, because you never know what it’s going to do,” which is true. It’s either going to spew out the top, bust out of the side, or slowly ooze out onto the table. Wait, are we talking about a burger or a zit?

Intense cheese infused inside the top bun. The Burger Bomb. #offthemenu Thanks @mizkae for the recommendation! 🙂 They just reopened two weeks ago.

If we’re honest, we’re pretty sure that even in spite its striking resemblance to a dermal infection, it’s damn tasty. But for better or worse, it’s being called the “Dr. Pimple Popper of burgers.” And the zit comparisons just keep on coming!

This "exploding burger" with a cheese-filled bun looks like a giant pimple popping. do not want

"This burger bun is stuffed with exploding cheese"

But there’s no such thing as bad press, right?