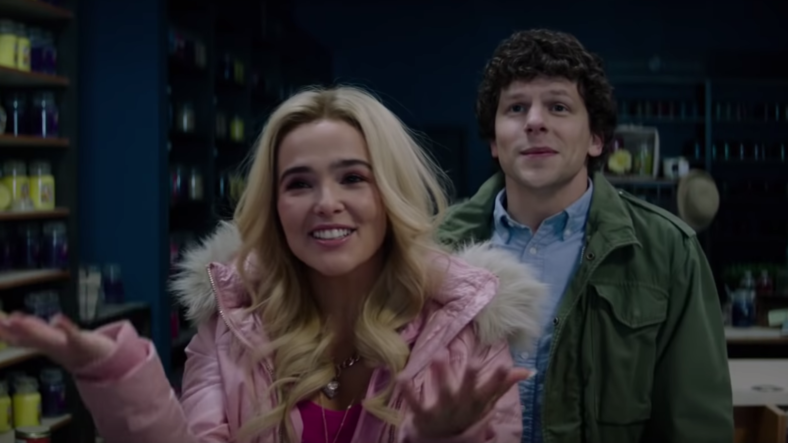 Zombieland: Double Tap is one of the more welcome sequels in a while, partly because 2009’s Zombieland was such an unexpectedly big hit. But the chemistry between stars Woody Harrelson, Jesse Eisenberg, Emma Stone, and Abigail Breslin was part of what made it work.

In the new international version of the trailer, we meet Madison, a new cast member played by Zoey Deutch. And she is quite the add-on.

Right at the beginning, Woody Harrelson’s Tallahassee says “Time to nut up or shut up” and it looks like the adorably dippy Madison is not prone to shutting up, even after forgetting “the seatbelt rule.”

A decade after Zombieland became a hit film and a cult classic, the lead cast (Woody Harrelson, Jesse Eisenberg, Abigail Breslin, and Emma Stone) have reunited with director Ruben Fleischer (Venom) and the original writers Rhett Reese & Paul Wernick (Deadpool) for Zombieland 2: Double Tap. In the sequel, written by Rhett Reese & Paul Wernick and Dave Callaham, through comic mayhem that stretches from the White House and through the heartland, these four slayers must face off against the many new kinds of zombies that have evolved since the first movie, as well as some new human survivors. But most of all, they have to face the growing pains of their own snarky, makeshift family.

Zoey Deutch has been doing TV and movies since 2011 but is probably at the status of ‘I recognize her, but not sure where from.’ A role like Madison in such a highly-anticipated flick will probably boost her profile and already-solid million-plus Instagram following (and she is worth the follow, see below) quite a bit.

so much vanity so little time 🤦‍♀️