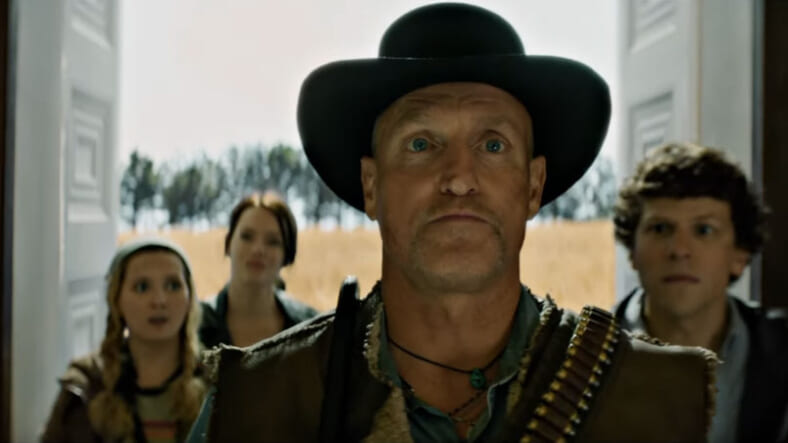 There are plenty of sequels to go around these days, but no one said that was a bad thing—especially when we’re talking Zombieland: Double Tap, the sequel to 2009’s cult hit, Zombieland.

The four actors at the center of the first movie—Woody Harrelson, Jesse Eisenberg, Abigail Breslin, and Emma Stone—are back and still kicking zombie ass, obviously. They’re kicking it right up to the abandoned and overgrown White House, where Woody’s character gets the chance to kick back in the Oval Office and say, “You’re welcome, America.”

Here’s what else you’ll find in the trailer above: weed, monster trucks, Luke Wilson, and Woody in an Elvis costume.

As to what the hell is going on, here’s the synopsis:

In the sequel, written by Rhett Reese & Paul Wernick and Dave Callaham, through comic mayhem that stretches from the White House and through the heartland, these four slayers must face off against the many new kinds of zombies that have evolved since the first movie, as well as some new human survivors.

But most of all, they have to face the growing pains of their own snarky, makeshift family.

Those new survivors include Rosario Dawson, too, in case you needed another reason to anticipate this sequel.

Get your second dose of the funniest imaginary post-Apocalypse universe imaginable when Zombieland: Double Tap hits theaters on October 18.