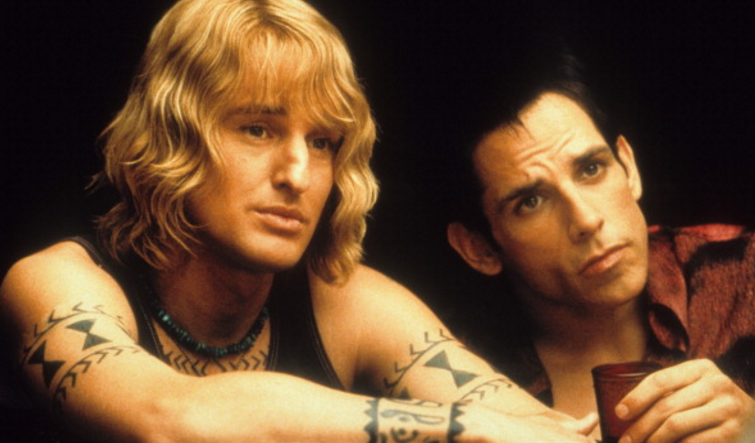 Today marks the 15th anniversary of the theatrical release of Zoolander, and to celebrate we’ve assembled a list of 10 Zoolander facts you probably didn’t know about the classic goofball fashion farce and its titular star, braindead male model Derek Zoolander.

Stiller’s wife Christine Taylor brought it to his attention that as he brushed his hair, his face took on a toned-down version of the squinty-eyed look of self-admiration that grew into the famous “Blue Steel”.

2. The Hansel character was specifically written for Owen Wilson.

“Owen was the most important casting to me in the movie because I think he is one of the funniest people around–and the part was written for him,” Stiller told Hollywood.com, “I don’t think [the movie] could have [been] made if he couldn’t do it.”

After the flick was given an R, Stiller appealed before the Motion Picture Association of America. After removing a goat (yes, the animal) from the romp, Stiller was able to convince the board that the sequence was “more silly than sexy,” according to the Los Angeles Times, and the movie was knocked down to PG-13.

4. Derek Zoolander’s erection in the massage scene was a remote-controlled dowel.

A special effects crew member controlled from under the massage table with a joystick.

5.. David Bowie was written into the script, but Stiller had no idea if he would want to actually appear in the film.

David Bowie’s song “Fashion” gave Stiller the idea to have him play the part of a judge during the walk-off scene. Bowie apparently liked what he read, and agreed to the cameo.

6. “Zoolander” was banned in two countries.

Both Malaysia and Singapore banned the movie after its release because of the violent depictions involving Malaysia’s Prime Minister.

7. Will Ferrell actually bleached his hair platinum blonde to play the role of Mugatu.

Ferrell said that he had to wear a wig for half of Saturday Night Live’s 27th season to cover his ridiculous ‘do.

8. Mugatu was based on a monster from Star Trek.

An albino ape creature from the Star Trek episode “A Private Little War” called “The Mugato.”

9. The World Trade Center was digitally removed from the film.

Despite shooting in New York City before September 11, Zoolander includes no shots of the Twin Towers because Stiller chose to edit them out of the movie. In a letter to The New York Times, Stiller explained that he wanted the movie to serve as escapist entertainment, and not as a reminder the then-recent national tragedy.

10. Derek Zoolander was originally supposed to be killed off at the end of the movie.

The idea was nixed by producers who thought the scene, which called for him to get hit by a train and ascend to heaven, would have been too expensive to shoot. In hindsight, they probably should have just footed the bill and shot it, as it might have prevented them from making the god-awful sequel.