The sequel to 2001’s comedy classic sadly does not deliver. 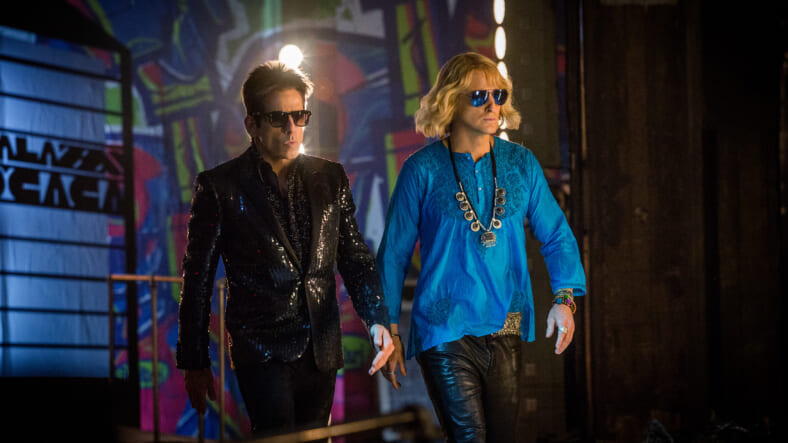 Nearly fifteen years after Derek Zoolander, Hansel, and Mugatu last graced the silver screen, the proverbial boys are back in town — but there’s no real reason for them to be.

Zoolander 2 doesn’t pretend to serve any purpose other than wringing whatever laughs are left out of these characters, and that would be fine, if the script weren’t so unfocused and flat. It’s a movie entirely reliant on cameos, pop-culture references, and desperate nods to the original, and these do not a movie make.

From its very opening sequence in which (spoiler alert, I guess, but it’s in the fucking trailer) Justin Bieber is brutally murdered, Zoolander 2 aligns itself more with cheap, meta parody-style humor than anything actually consistent or funny.

After the opening Bieber gag, we get the most overdone “chosen one” set-up that’s already been parodied so often it should be banished, complete with a heavily-bearded, recluse Zoolander who now lives in the middle of the woods…in “Extreme Northern New Jersey.”  We learn that following the events of the first film, both Zoolander and Hansel have been in hiding. Zoolander’s wife has been killed, his son taken from his custody, and Hansel’s face has been “disfigured.”

Our male model heroes finally reunite when they are summoned to Rome by fashion’s new It girl Alexanya Atoz (a damned near unrecognizable Kristen Wiig) to get back on the runway. Derek agrees to end his bout of seclusion in the hopes that getting a job will prove to the powers-that-be that he deserves his son back, and Hansel does it to get away from his wife, wife, wife, wife, husband, goat, and other wives. It’s not long before they are recruited by Valentina (Penelope Cruz), an agent from Interpol’s Global Fashion Division, to help solve the conspiracy surrounding the deaths of the world’s most beautiful people.

But that’s all beside the point. Nobody is going to this movie for the story — all Zoolander 2 had to do was make us laugh for 100 minutes, and everything would be hunky-dory. Unfortunately, the film throws about 300 jokes at the wall, and maybe 25 of them stick. The humor is all over the place, and you never know whether you’ll be assaulted with a lame slapstick routine, or a retread of a gag from the original.

Zoolander itself is no masterpiece, but it’s developed a cult following for a reason. There are at least some memorable sequences, like the gasoline fight or the “in the computer” scene, tons of still-quotable lines (“Hansel’s so hot right now, “eugoogly,” “a center for ants?!”) that have miraculously stood the test of time.

Zoolander 2 plays exactly how you’d expect a comedy sequel to play, especially one that takes place well over a decade later. There are tons of references to the original that don’t muster anything more than a chuckle, and the whole movie just tries — and fails — to double down on what people found funny the first time around, like Zoolander mispronouncing words, or Hansel’s next-level sexual prowess.

Kristen Wiig gets some laughs, but the script does her no favors and her character is a one-joke caricature, much like every other role in the film. Her entire schtick is that she has a funny accent. Kyle Mooney’s entire thing is…being Kyle Mooney. For some reason, Fred Armisen’s face is awkwardly superimposed on the body of an 11-year-old, and just as quickly as he appears, he’s gone. The one shining light here is Will Ferrell reprising his role as Mugatu, but he just shows up for the third act.

One of the biggest problems with Zoolander 2 is that Derek and Hansel are just as one-note as the supporting cast. Their banter and idiocy was certainly funny in 2001 (and still holds up now in that film), but, fifteen years later, the jokes are simply stale. For every laugh-out-loud funny “Zoolander’s an idiot!” moment, there are 10 other obnoxious ones, and this rule can be applied to almost every gag in the movie.

Instead of actually writing a funny script, the four (FOUR! 4!) screenwriters chose to fill the movie with as many celebrities as possible, which is the cheapest form of comedy. Cameos are easy — they’re virtually guaranteed a reaction based on the ludicrousness of the person being present, and that’s the entire bit.

For Zoolander 2, a film filmed with celebrities playing themselves, it’s basically a way to break the fourth wall and be meta, just shy of actually mugging for the camera. Can you name a cameo in a movie where the one-liner the person said was actually funny and not gratuitous? I’ll wait.

If there’s not a random celebrity on screen, chances are some character is making some sort of pop culture reference. Nothing is out of bounds, as everything from 2 Broke Girls to Tales From the Crypt and even the fucking Boxtrolls get a mention. There is one running gag involving Sting that I really appreciated, but based on my audience’s reactions, I’m So Lonely on this one.

This brand of humor weighs everything down, and does irreparable damage to the film’s replay value. With the surprise element removed, none of these jokes will land ever again. The beauty of Zoolander for its fans is that, no matter how times you see it, that damned gasoline fight will still make you laugh. Zoolander 2 is devoid of any such moments, so there’s zero reason to revisit it.

Despite the fact that almost all the same talent was involved, Zoolander 2 doesn’t even match the very modest expectations set by the original. One day, when it hits the basic cable cycle as vigorously as its predecessor, nobody will be tuning in.