These beautifully bold 100-proof whiskeys (and one Apple Brandy) will have you sipping pretty all year round. 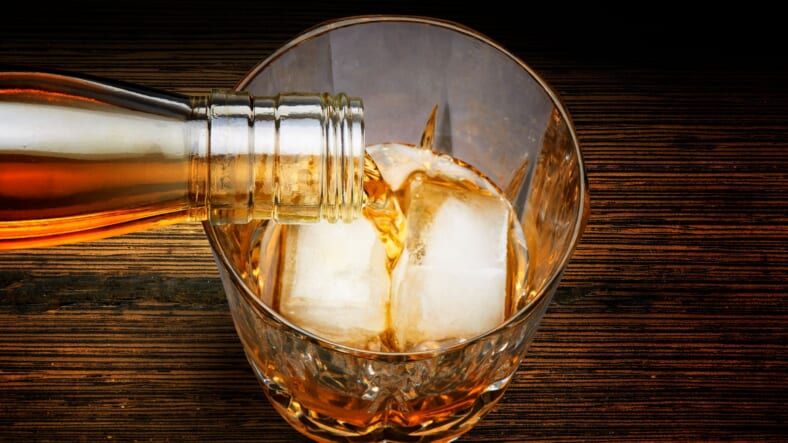 Nicole Austin, general manager and distiller at Cascade Hollow Distilling Co., where George Dickel Tennessee Whisky is made, doesn’t mince words when it comes to the meaninglessness of the numbers on the bottles.

There’s George Dickel 8 and George Dickel 12, which people often mistake for age statements. These are the results of market research, according to Austin, not some old family recipe that Mr. Dickel himself once came up with. But the numbers on the brand-new George Dickel Bottled In Bond bottle actually mean something.

This whiskey is, as mandated by the Bottled In Bond Act, bottled at 100 proof, comes from one distillery and one distillation season, and is at least four years old. In fact, Dickel Bottled in Bond spent 13 years in barrels, much longer than is mandated by regulation.

And here’s another number for you – it’s priced at just $36. That’s pretty remarkable for a whiskey of this age, especially in the bourbon world (yes, bourbon – Tennessee whiskey is essentially bourbon that has been charcoal filtered before being barreled, also known as the Lincoln County process).

Normally, a 13-year-old American whiskey would be sold for at least twice as much, but according to Austin the point is to be an affordable luxury, a principle she says is at the heart of the brand.

So why release a new BIB expression? Austin says it’s an authenticity marker, a response to a lack of consumer trust that is as relevant today as it was in the late 19th century.

Even those who don’t normally drink Tennessee whiskey should try this out – it is full of spice, caramel, apple, and menthol flavors, with a bit of heat and a touch of oak. Exactly 2,500 cases are rolling out in New York, California, and the southeast, and hopefully stores will keep the price at its recommended level.

Here are nine other bottled-in-bond whiskeys and spirits that you should try now.

The main difference between regular old Jim Beam and the Bonded expression is the proof – 100 versus 80.

But that difference goes a long way, giving this bourbon spice, heat, and heft that greatly improves upon the classic White Label Beam flavor, which tends to skew a little light for serious whiskey drinkers. $20

Henry McKenna recently was named “Best in Show” at the San Francisco World Spirits Competition, delighting some and pissing off others who are afraid the price is going to skyrocket now.

This 10-year-old single barrel bourbon is touted by Heaven Hill as being the “the longest aged bottled-in-bond available today,” and that still might hold true for bourbon (remember, Dickel is technically Tennessee whiskey). Oldest or not, this is a warm, rich, and very satisfying bourbon that you should try before the shelves are emptied. $35

There are generally two cheap, mass-produced rye whiskeys to choose from these days – Old Overholt (from Jim Beam) or Rittenhouse Rye (from Heaven Hill).

Rittenhouse has been bottled-in-bond for many years, which sealed the deal for some (although Old Overholt now has its own BIB version). Rittenhouse fulfills its destiny as a solid if not remarkable rye whiskey, aged for four years, that gets the job done quite well in a Manhattan or any other classic cocktail that calls for rye. $25

New Riff decided to go all BIB all the time, making every whiskey it releases a bottled-in-bond expression. That’s a bold statement for a new distillery, ensuring at least the concept of quality for consumers who may not be at all familiar with the brand.

The icing on the cake is that the whiskey is actually really good, from the bourbon to the rye to the single barrel releases. This does not taste like craft whiskey released before it is ready; this is high-quality, four-year-old, American whiskey that holds its own with the big guns. $40

It’s not just whiskey that can be bottled-in-bond. Laird & Company makes applejack, an apple-based spirit that is considered by many to be the oldest spirit distilled in America, and apple brandy.

The New Jersey company makes a BIB version of the latter spirit, a 100 percent apple brandy aged for four years in charred oak barrels. Substitute this one in your favorite whiskey cocktail once in a while, and you won’t be disappointed. $32

Buffalo Trace makes all kinds of good whiskey that people go crazy for, from Pappy Van Winkle to George T. Stagg to Weller. But one of the best lineups you can find from this Kentucky distillery is the Colonel E.H. Taylor collection, with every bottle (aside from the Barrel Proof which is bottled at 125 proof) falling under the BIB classification.

The Four Grain may have joined the ranks of nearly impossible to find, but pick up a bottle of the rye, bourbon, or single barrel for a drinking experience that won’t disappoint. $40

In 2018, Woodford Reserve released its first BIB expression as part of its Distillery Series. This means that this smaller 375-ml bottle can only be round at the distillery in Versailles, Kentucky – and supplies are running out.

The higher proof sets this apart from regular Woodford bourbon, adding a bit more flavor than you might be used to, and this marks the first time Woodford has ever released a BIB whiskey. $50

Previous whiskey releases from Virginia distillery Catoctin Creek have qualified as BIB, but this was the first one explicitly marketed as such. It’s a 100 percent rye whiskey that is spicy, earthy, and fruity.

You can make a good cocktail with Rabble Rouser, but maybe save this one for sipping on its own. $96

NY Distilling Company’s new BIB version of its Ragtime Rye is a marked improvement upon the original.

An extra year or so aging in oak goes a long way here, making this stand out in the sometimes underwhelming world of craft spirits. It also qualifies as Empire State Rye, a new category that George Dickel distiller Nicole Austin had a hand in bringing to life. $50