10 Elite American Breweries From ‘The United States of Craft Beer’

Get thirsty for an unforgettable craft beer journey across the U.S.A. 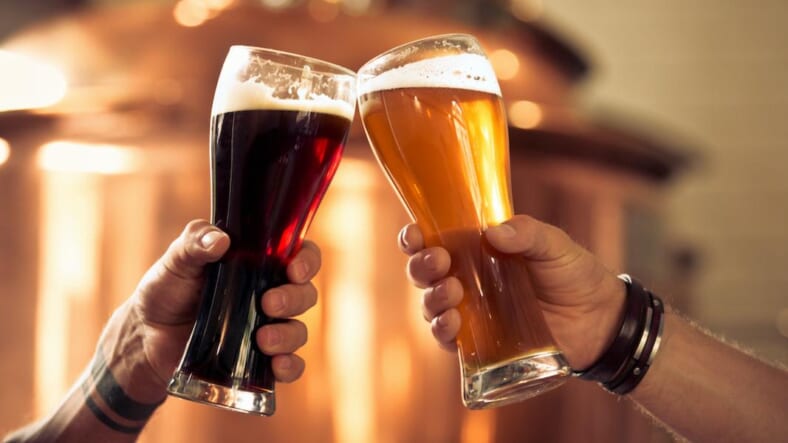 In the past few decades, there has been a renaissance in beer brewing in the United States. New flavors, new styles, and new breweries are popping up every day. Collaborations are taking place—oftentimes between brewers on opposite sides of the nation or even on different continents. Prospective brewers can attend universities dedicated to teaching the arts of craft brewing, and record numbers of students are graduating from these programs.

Though beer is brewed all over the world, and the origins of this beverage are far from the shores of this country, it is my belief that in no other place can you find such innovation, such craftsmanship, and such a wealth of good beer as is now in America. Here, ten of the best American breweries spotlighted in The United States of Craft Beer, Updated Edition:

It’s not just any one beer that puts Alaskan among the best in the nation. Founders Geoff and Marcy Larson’s focus, from their first beer to their last, is on preserving and enhancing the history and magnificence of brewing in the state of Alaska. Their recipes use local ingredients whenever possible, and they produce a product that is clearly first a labor of love and second, a commodity to be sold. When it comes to food, beer, wine, or anything that must be savored to be enjoyed, this is always the factor that separates the best from the rest. Without the passion, the love, the creativity to deliver an experience in addition to a taste, the flavor will fall flat.

AleSmith was originally founded in 1995 by Ted Newcomb and Skip Virgillio, but is currently owned and operated by Peter Zien, AleSmith’s brewmaster, who acquired the operation in 2002. Their beers are diverse and powerful, leaning heavily toward the Belgian style of beer making. AleSmith also barrel-ages many of their beers: their Barrel-Aged Speedway Stout was once named the number one beer in the world on RateBeer.com. At the time, that prestige had never been achieved by a North American beer. It’s aged for more than nine months in oak barrels, which of course adds flavors of wood and vanilla to the wondrously dark liquid. It’s one of their rarest offerings.

Oskar Blues beers have become one of the standard-bearers for the craft beer industry in America. They are consistent, delicious, big and bold, and often easy to locate. Even when I’m tempted to explore beers from new breweries, if I see an Oskar Blues on the menu, I find myself irresistibly drawn back into the fold. The flavors are classics—comforting and familiar and perfectly executed.

Today Dogfish Head operates out of a 100,000-square-foot facility, offers more than twenty different types of beer, and is distributed to more than half the states in the Union. Despite their growth and success, the inventiveness and fearless creativity that was born out of that original 12-gallon brewing station hasn’t left the brewery. They continue to try new things and deliver surprising new flavors for beer lovers to savor and search for.

At the end of the day, it’s about fun, about exploration and creativity— bringing something new to the table, trying new ways to enhance traditional recipes to make them unique. It’s these things that are at the heart of the craft beer movement: the search for something new, the quest for new taste, finding something off the beaten path. The brewers at Cigar City Brewing are bringing us the vehicles to get off that path, and that is why we love them.

Maui Brewing Company believes in creating as small of a footprint on the islands as possible. To keep paradise looking good, you have to work hard to avoid breaking down the fragile ecosystems that make the islands so beautiful. To that end, all of the brewery’s delivery trucks run on biodiesel (vehicle fuel made from biodegradable materials such as vegetable oil or animal fat). All of the brewery’s packaging is made from recycled cardboard. The brewery is lighted by high-efficiency, energy-saving light bulbs. And all of the spent yeast, grain, and hops that come out after the brewing process are donated to local Maui farmers to feed to their pigs and cattle.

Most of Revolution Brewing’s beer labels have either a little red star, the internationally recognized symbol of the revolutionary, or a clenched fist, the internationally recognized sign for I’ll Punch You If You Don’t Try My Beer. My favorite of their beers, Anti-Hero IPA, has an image of a hop-headed military officer standing before a unit of hop soldiers parachuting out of the sky, presumably to do battle with your tongue. The beer itself is rich, deep, and refreshing with a solid malt backbone that holds up just enough to keep the hugely delicious pine and citrus hop attack from pummeling you to the floor. It’s an IPA with an attitude, and it’s the way all hop soldiers should be trained.

NOLA is the first brewery to make a cask-conditioned beer in the city of New Orleans since the “thirteen years of doom” (also known as Prohibition). Unlike their year-round and seasonal releases, these beers are more experimental, using fresh fruit and spices to create brand-new flavors and explore new territory. If you are lucky enough to be in New Orleans when one of these casks is opened, you will be treated with a host of new beer additives, including pineapple, papaya, plum, honey, peach, poblano pepper, and honey. It’s their dedication to their community and to their craft that makes NOLA’s brewers rise to such heights. They are undaunted explorers, returning to ground that has seen its fair share of difficulties, but turning that difficulty into an opportunity.

Victory’s beers are rich and satisfying. They are bold and inviting. Victory’s beers are like well-built luxury cars—everything is solid, the features are exactly where you expect them to be, the product responds without hesitation, and it just feels right. In the first sip you can taste the precision engineering. With the last sip, your expectations have risen, and they are still being met. Drinking a Victory beer is an experience, a journey toward relaxation and refreshment, and isn’t that what life is about, the journey itself?

Boulevard boasts an impressive lineup of beers that assault your senses even before you open the bottle. The company’s label designs are some of the nest in the business. Expertly blended colors with classic composition, they look as if they could be equally at home framed and hung on the walls of a jazz club or hip music venue as on the front of a beer bottle.

Excerpted from The United States of Craft Beer, Updated Edition by Jess Lebow, which is available for purchase beginning August 25, 2020.

Copyright 2020 by Simon & Schuster, Inc. Brewery photographs supplied courtesy of the respective breweries. Used by permission of the publisher. All rights reserved.