10 Seasonal Beers You Need to Drink This Fall

The leaves are changing, and so should your beer. 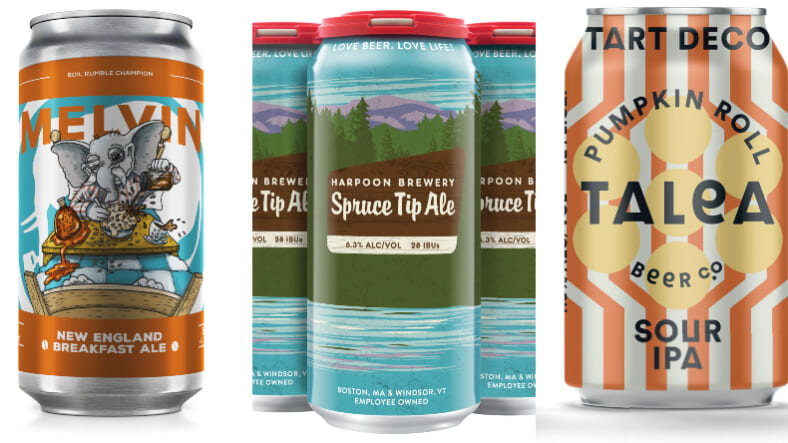 Fall is a great time to switch up your beer selection. The dropping temperatures and lengthening nights mean that darker, fuller beers hit the spot, replacing the light, citrusy lagers and IPAs of the summer. Cue the seasonal releases, often flavored with the usual suspects – pumpkin and a variety of spices (although please no pumpkin-spice, save that for your latte).

And while there is a glut of this type of beer, some are actually very good. Of course, rules are meant to be broken, and there are some juicy lighter-bodied beers that taste great in autumn as well. Here are ten beers to look out for this fall, from classic standbys to some interesting and tasty new releases.

Seattle’s Elysian Brewing does not mess around when it comes to pumpkin beer. There are five available this fall to choose from, each representing a different style: Punkuccino Coffee Pumpkin Ale, The Great Pumpkin Imperial Pumpkin Ale, Dark Knife Pumpkin Schwarzbier (a first for the brewery), Dark O’ The Moon Pumpkin Stout, and Night Owl Pumpkin Ale. This should be enough to satisfy all your pumpkin beer cravings.

Dead Guy Ale has been a classic fall beer since Rogue Ales & Spirits came up with it back in the ‘90s. It’s available all year long, but from September to October the packaging shifts to a more Halloween-friendly theme. Dead Guy is an easy drinking beer made in the German Maibock style. If you’re looking for something a bit more intense, check out Dead ‘N’ Dead, a barrel-aged version of the original ale.

Pumpkin doesn’t have to be the only fall flavor for your beer. How about a cranberry saison to go with your Thanksgiving meal this year? Colorado’s Lone Tree Brewing Co. has one out now, a Belgian farmhouse ale aged with cranberry puree that has just a splash of tartness to wake up your senses and pucker your cheeks.

As mentioned above, just because it’s the fall doesn’t mean you have to completely stop drinking IPAs. 10 Barrel Brewing’s new Profuse Juice is a hazy IPA that is an attempt to win over non-IPA drinkers by dialing back the bitterness. Also, 10 Barrel just partnered with the Surfrider Foundation on this release, with one percent of the profits going to the organization to help in its conservation efforts.

Ska Brewing was created back in the ‘90s by two guys who loved both ska music and beer, if you couldn’t already tell by the name. That means you can expect lots of two-tone design and references to ska and punk bands, including a collaboration with Rancid on the new Brewstomper. This fall, check out Buster Nut Brown Ale, a brown ale with just a hint of nuttiness that goes down pretty easy.

Southern Tier Brewing calls southwestern New York its home. The brewery has a new nitro can version of its Pumking Imperial Ale out now, offering a fresh take on a Halloween/fall beer that many know and love. The combination of hops and pumpkin here perfectly encapsulate the feeling of autumn.

Talea launched in NYC just last year, a female-fronted beer company that is just getting started and already impressing beer fans. The new Pumpkin Roll Tart Deco Sour IPA brings together notes of pumpkin, vanilla, and cinnamon into a sour IPA to create something dessert-like and altogether different.

This October, Harpoon Brewery will release its Spruce Tip Ale, which it describes as a cross between an American pale ale and a hoppy amber. It’s brewed with citrus and piney hops, as well as white spruce tips, delivering a crisp forest-like flavor that should play well through the holiday season.

Up and Down Coffee Blonde Ale

Independence Brewing Co., based in Austin, Texas, has a new beer on the way this November that was made in collaboration with café and coffee roasters Little City. Up and Down Coffee Blonde Ale will be the first canned nitro ale and first coffee blonde ale for the brewery, made using coffee beans from Brazil.