12 Distillery-Exclusive Spirits Worth Traveling For

Get these coveted bottles straight from the source. 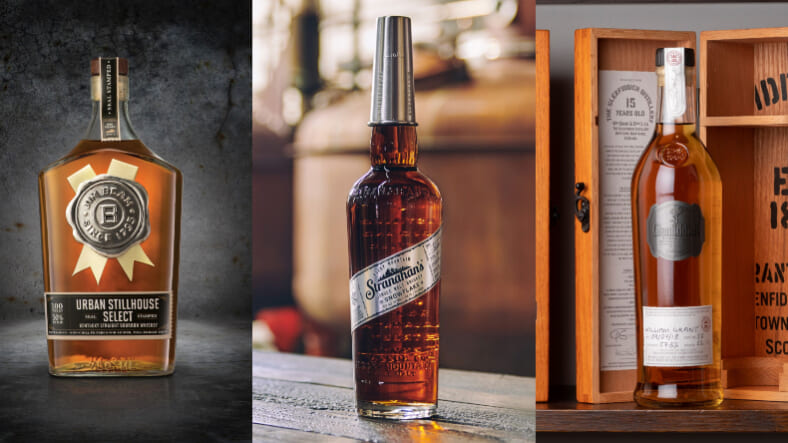 It was 7 a.m. on a cold December morning, and the line outside of the Stranahan’s whiskey distillery in Denver snaked all the way around the block. The person in the number one spot, Russell Cowdin, arrived a week prior to secure his position. He’d been camped out braving the elements with a growing group of fans that are just as hardcore, waiting for the distillery to open its doors on December 1.

That’s when Stranahan’s released Snowflake, a distillery-exclusive, limited-edition whiskey. The night before, the parking lot was swarmed with people in tents and sleeping bags (which will be covered with frost come morning), as they drank, hung out in a warm tent dubbed Snowflake Village, and generally got merry.

Making certain bottles only available to purchase at the distillery puts a certain premium on them, and also entices people to travel to visit the distilleries at which they are made.

When asked if he’d ever consider a national release of Snowflake, Stranahan’s master distiller Rob Dietrich scoffed at the notion.

“It’s a Colorado thing,” he says, “you have to come here to experience it.”

Here are some distillery-exclusive spirits that are worth traveling for. Note – in some states like Kentucky, law dictates that every release must be sold at a few select retailers as well. But to get your hands on these bottles, your best bet is still to visit the distillery.

This year’s Snowflake release, batch 21, is named after the highest peak in Colorado. The whiskey is Stranahan’s Original (an American single malt aged for at least two years) that is finished in nine different casks before being blended together by master distiller Rob Dietrich.

The new season of Top Chef takes place in Kentucky, so you can bet there’s going to be a lot of cooking with bourbon involved. This new bottle is part of Maker’s Mark’s Private Select program, in which you can customize your whiskey by choosing from ten different finishing oak staves to put into a barrel for extra flavor.

About 480 bottles were made available on December 14, the day after the Maker’s Mark episode aired. The recipe for this bottling used three baked American staves, three Maker’s 46 staves, and four roasted French mocha staves. $80

It’s not like Jack Daniel’s really needs to make anything else other than the eternally popular Old No. 7. But the distillery recently released two exclusive expressions (with another on the way in 2019), each a play on classic Jack.

First is High Angel’s Share Barrels, a 107-proof whiskey barreled in 2013 that ended up having an unusually high evaporation rate, resulting in a tasty, more concentrated whiskey.

This new offering from Bushmills is first aged in ex-bourbon and sherry casks, as is the norm with the brand, before being finished for a year in acacia wood. The wood has been around for many millions of years, and is said to be virtually indestructible.

According to master blender Helen Mulholland, it imparts a spicy, vanilla flavor to the whiskey. Twelve-thousand bottles are available to purchase at The Old Bushmills Distillery in Northern Ireland. $95

The Jim Beam Urban Stillhouse opened in 2015 in Louisville’s 4th Street Live area, a couple of hours away from the bucolic environs of the Jim Beam distillery out in rural Clermont. The Urban Stillhouse Select is “extra-aged,” bottled at 100 proof, and non-chill-filtered.

Other recent Jim Beam releases have met these qualifications as well, but this is the only bottle on which you can find a steel stamped logo. $46

There are several expressions that are only available at the distillery, including the Fr.oak (French oak aged), High Rye Bourbon, Wheated Bourbon, and the Single Malt Single Barrel Staff Selection. Prices vary

This final release is a 17-year-old whisky that was aged in bourbon, sherry, and wine casks. Look for a bit of smoke along with orange and sweet nut notes. £125 (~$160)

The second entry into Woodford Reserve’s 2018 Distillery Series is this bottled-in-bond bourbon. The whiskey follows all the regulations of the Bottled in Bond Act of 1897, meaning it’s bottled at 100 proof and aged for at least four years in a federally bonded warehouse, among other factors.

It’s a bright, rich sipper that oozes brown sugar and vanilla with a nice hit of dry spice. $50 per 375 ml bottle

Reverie is a distillery-only release from Seattle’s Westland Distillery that is meant to be an experiment in blending and a break from the confines of tradition.

The whiskey is matured for a minimum of 49 months in a variety of casks, including ex-bourbon and Moscatel. This is the first of this series, and each subsequent release will vary from the previous in order to showcase the possibilities of the American single malt category. $110

This distillery-exclusive release from Glenfiddich is a single malt whisky that has been matured in sherry, ex-bourbon, and virgin oak casks for at least 15 years. It’s non chill-filtered and bottled at cask strength (55-60 percent).

This release differs from the Distillery Edition, which is lower proof and uses different casks, and the regular Glenfiddich 15, which is chill filtered and allows the whisky to spend time in a marrying tun. £120 (~$150)

Bluecoat American Dry Gin, distilled in Philadelphia, is an excellent example of just how good American gin can be.

This distillery exclusive takes Bluecoat, which is based around botanicals like juniper and citrus, and infuses organic elderflower into the spirit via maceration. The result is a light and floral gin that can be used in a variety of cocktails. $35

This single malt from Taiwan’s Kavalan distillery is a single cask whisky that is bottled at cask strength and matured in rum casks.

The whisky’s release was meant to celebrate the first decade of the distillery’s existence, as well as the completion of a second distillery. This is the first whisky from Kavalan to be aged in rum casks. $52