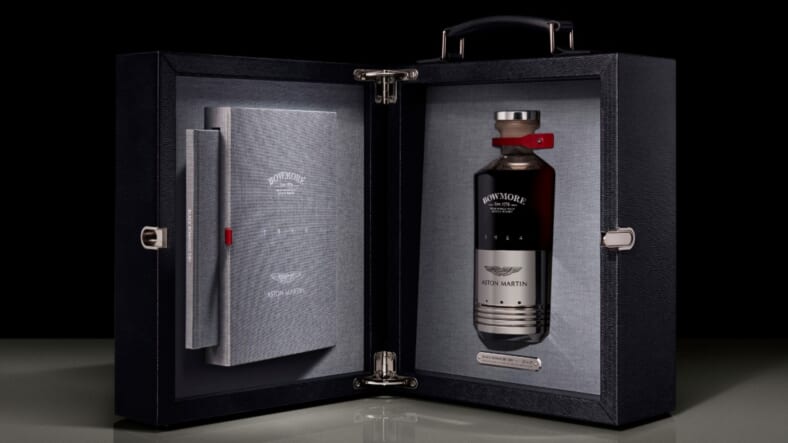 The iconic British automaker has partnered with legendary Islay whisky distillery Bowmore to celebrate a year that was of great importance to both companies, and to release a few special bottles of Black Bowmore, which is one of the rarest whiskies on the planet.

“1964 is arguably one of the most significant points in the distillery’s 240-year history,” according to a release from the folks at Bowmore. “The arrival of a new boiler allowed the distillery to enter the modern age of distilling, as coal fires made way for steam in heating the stills. It was the first distillation from this new boiler that produced the spirit which was to become the iconic Black Bowmore, a sublimely rich and decadent single malt reflected in awe-inspiring deep darkness.”

Black Bowmore was first distilled November 5, 1964 and is among the most sought-after single malts ever created. This release is just the sixth ever, and only about 6,000 bottles have ever been released (significantly less than a single year’s release of something like Pappy Van Winkle).

Aston Martin, meanwhile, released the DB5 in 1963, and the next year it went on to arguably be the “it” car of the year when a certain well-dressed driver took the wheel. His name? Bond. James Bond.

Black Bowmore DB5 is a celebration of a shared timeline, then, and a lovely excuse for both brands to get together and crank out a few bottles of this rare liquid. Just how many bottles are they releasing?

Well, not many—in fact, not even enough bottles to be considered “not many.” Bowmore is putting just 25 bottles of DB5 out before the season is over.

The good news (sort of) is that with a $65,000 price tag, this 31-year-old oloroso sherry-aged whisky probably cuts a lot of the would-be buyers with a ceiling. The bad news is, well, we can’t afford one.

Bowmore released tasting notes for the 31-year-old Black Bowmore DB5, which is bottled at 49.6 percent ABV, which you can read below, if you want to torture yourself:

On the eye: Deep obsidian black

Taste: Intense flavors of mango, passion fruit and acacia honey interwoven with a powerful combination of coffee and tobacco smoke

Savor: A wonderfully long and decadent finish with tropical fruits and spice, defining more than 240 years of craftsmanship

Clay Whittaker is a Contributing Editor at Maxim.com. His work has appeared in Cigar Aficionado, Playboy, Esquire, Forbes, Town and Country, and elsewhere. You can subscribe to his newsletter here, and follow him on Instagram here.