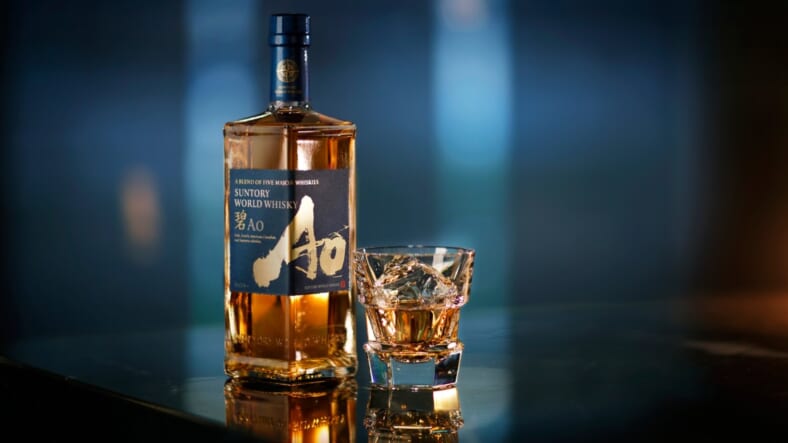 The high-flying hooch, which will be available in 16 markets with a suggested retail price $71, is, according to Beam Suntory, the “first innovative whisky launch in global travel retail since the coronavirus pandemic began.” (Basically, you can buy a bottle at an airport that carries it if you have an international airline ticket.)

Blended using whisky from five renowned distilleries in Japan, Scotland, Ireland, Canada and the U.S., Ao, meaning “blue”, is named after the oceans that connect those distilleries together.

The unique whisky is designed to evoke “the heathery flavor of Ardmore and Glen Garioch in Scotland, the complexity of Cooley in Ireland, the smoothness of Alberta in Canada, the vibrance of Jim Beam in the U.S. and the subtlety of Yamazaki and Hakushu in Japan.”

With notes of vanilla, tropical fruit and cinnamon, it attempts to bridge each whisky-making region, giving it a unique taste.

The new bottle is five-sided in honor of the five major whisky-making regions. The calligraphic lettering was written by Japanese calligrapher Tansetsu Ogino with an intent to represent the whiskies’ global origins and Japanese craftsmanship.

Here’s some tasting notes from the brand on their latest amber-hued whisky below:

Profound vanilla, pineapple-like fruitiness on top, a creamy sweetness and depth with a lingering woody aroma

Sweet and smoky, spicy and woody, a many-layered complexity