The Best American Amaros and Aperitivos 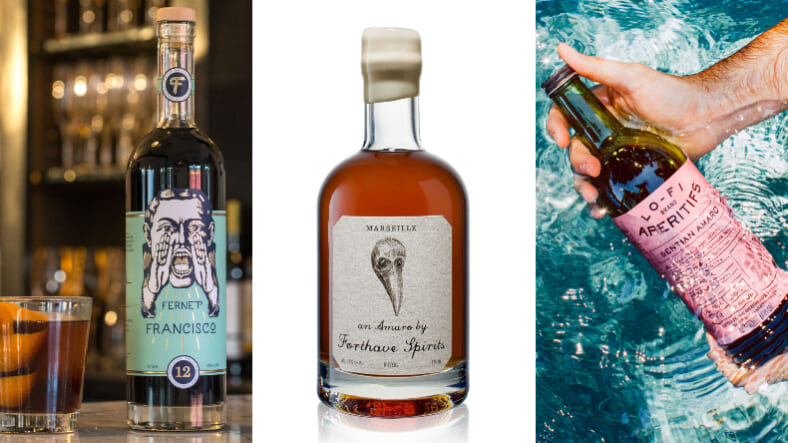 If you haven’t sipped amaro, a category of herbal liqueurs named after the Italian word for “bitter”, you may have had the bittersweet drink in one of its many incarnations. Maybe in a shot of Jagermeister or Fernet-Branca—minty, bracing shots beloved by bartenders and college kids. Or perhaps, shaken or stirred into classic cocktails (bartenders love the stuff). Does Aperol Spritz or Negroni ring a bell?

The hyper-local European liqueur has an incredible range and diversity. Depending on the region and maker, Amari range from super sippable aperitivos to night-black digestivos to bracing menthol shots. It tastes medicinal, you say? That’s because Amaro was initially created as a Medieval elixir—the herbal antibacterial properties were thought to protect drinkers against the plague.

Amaro is the combination of sweet, bitter, and booze. The spirit is made by macerating a potion of herbs, barks, seeds, spices, citrus, and botanicals in a neutral spirit or wine. Add sweetener and water to lower the proof (amari range from 16% to a dizzying 40% ABV), and the mixture is left to rest in a barrel or a bottle. Ingredients and aging will change dramatically depending on where the bottle comes from and who makes it—most recipes are closely-guarded family secrets.

How Do I Drink Amaro?

The category is incredibly diverse, as are the ways to drink amaro. Top a shot of amaro with soda and slip an orange slice in it (Campari soda, anyone?). Stir or shake amaro into classic cocktails: Paper Plane, Negroni, Hanky Panky or Toronto cocktails are good starts. Or, do as the Italians do and sip amaro as a digestivo post-dinner.

What Amaro Should I Buy?

While most of the traditional amaro hail from Europe, next-wave American craft distillers are breathing new life into the category. Now, there are bold botanical amari from Brooklyn and sunny Spritz-ready spirits from California. Each gives an American spin on an Italian tradition.

The San Francisco-born distiller conjures up a small batch, artisanal version of Fernet Branca. It’s just as divisively bitter and smooth as its Italian counterpart thanks to a blend of twelve ingredients that co-founders Max Rudsten and Ben Flajnik source locally. The full ingredient list remains a closely guarded secret (Rudsten spent years barrel-aging plants and herbs in his background before settling on this recipe) but notes of rhubarb, chamomile, orange peel and mint shine through. $29.95

Out in Napa, Lo-Fi aperitifs concocts fruit-forward, wine-based amaros and vermouths with a bartender co-sign (Claire Sprouse of Brooklyn’s Hunky Dory worked on the product). The Gentian amaro is rich and juicy, made with a base of California Muscat, Canelli and Chardonnay grapes and spiked with a touch of tart cinchona bark, ginger and bitter root extracts to cut the fruitiness. $20.95

Today’s new guard of American–made aperitivos even includes sips for the non-drinkers: Meet Proteau, a new line of non-alcoholic aperitif by John deBary, former bar director at Momofuku. The first in the line is Ludlow Red, a silky faux-liqueur made with blackberries, fig vinegar, dandelion, violet and black pepper. A Spritz from the brand is expected to hit shelves later in the year. $70 (two bottles)

Put the bottle of Campari back on the shelf: Capitoline’s aperitivo (think notes of Seville orange, grapefruit, ginger and cinnamon) subs in for the Italian spirit in Negronis, Spritzes and beyond. The DC distillery still leans on old-school dying techniques, like Cochineal, where red dye is extracted from the Cochineal beetle (Campari used the same process for years until the brand went mainstream). Also worth noting is the brand’s vermouth: golden and silky with notes of saffron and candied lemon that nods to founder Kat Hamidi’s Persian heritage. $24.99

To create their Marseille amaro, Forthave founders Aaron Fox and Daniel de la Nuez dove deep into the history of bitter elixirs and uncovered a secret recipe from Medieval thieves. Back then, the blend of cinnamon, mint, honey and eucalyptus was thought to protect looters from the plague. Now, the recipe’s fans are New York’s top bartenders (think Eleven Madison Park and People’s Wines) who serve the spirit neat or in a range of cocktails. Also from the Brooklyn-based distillery: the “Red” aperitivo, a superb Campari alternative with a bright bitterness and a warming spice, a Nocino walnut liqueur, and the just-released Genepy, a golden spirit made with Alpine flowers. $25.50

Distilled Pinot Noir acts as the base of this juicy, San Francisco-made amaro. The rich floral notes will woo wine lovers, but BarMatt (made by bartender Matt Pennington) was designed to play exceptionally well in cocktails—your Manhattan or Old Fashioned could do with a dose of this liqueur. $39

The Italian-born, American-bred distillery takes amari very, very seriously: at any given time, Don Ciccio and Figli makes upwards of 15 different amari and aperiti, ranging from sweet to bracingly bitter. Their Ferro-Kina is based on a centuries-old recipe that calls for cinchona bark cooked on iron plates. The bitter Luna aperitivo uses a mix of grapefruit, gentian and chicory (try it in a Boulevardier). Other stand-outs include the C3 Carciofo, slightly bitter and made with artichokes, and the sweeter Ambrosia, with turmeric, blood orange, cantaloupe and carrots—Amalfi sunshine in a glass. $39-$55

BroVo was started by bartenders, for bartenders: the company cherry-picks mixologists from across the country for collaborative, cocktail-ready spirits. Like the No. 1 amaro: a gateway amaro with heavy citrus notes and a bit of Mexican cinnamon spice. The quirky No.14 aaro fuses chocolate and thyme with touches of cinnamon, sarsaparilla and vanilla. Look for the brand’s other out-of-the-box liqueurs, like douglas fir, ginger, and lavender. $34.99

The Denver-based distillery, run by brothers Todd and Scott Leopold, makes vodka, whiskey, gin, absinthe and a full range of spirit and liqueurs, but their take on fernet is particularly showstopping. It’s intensely piney, heavy on the spearmint with hints of rose, elderflower, chamomile, and honeysuckle and sweetened with blackstrap molasses. At 40 proof, one of the strongest amaros in the game. $35.99