The Absolute Best Irish Whiskey Distilleries To Visit In Dublin

When in Ireland’s capital city, indulge in these Irish whiskey distilleries that serve up killer cocktails. 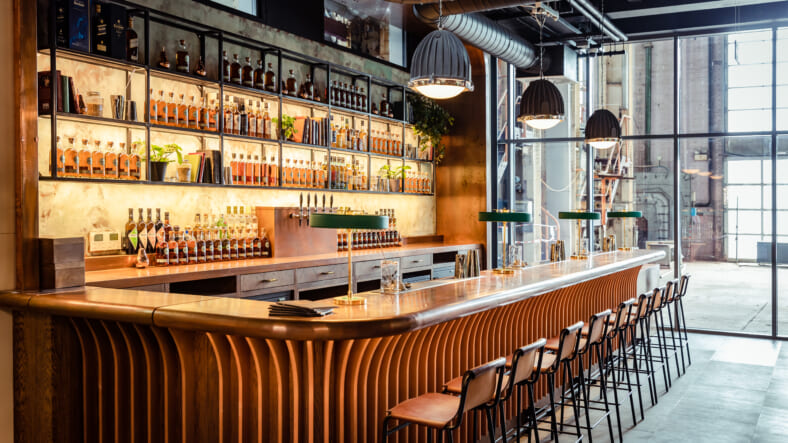 Irish whiskey is one of the fastest growing categories of brown spirits, with distilleries new and old releasing expressions every year that experiment with cask finishes and mash bills. But these days Irish whiskey still isn’t known as a go-to cocktail component.

When most people think of cocktails featuring Irish whiskey, Irish Coffee and the unfortunately named Irish Car Bomb are usually the only things that come to mind.

But in Dublin, you can find some seriously creative and delicious drinks made with the country’s signature spirit.

In a city where a drink is as close as the nearest pub (and there’s one just around every corner), you can find some of the best cocktails at the city’s urban distilleries, the literal source of the whiskey used in the drinks. Here are some of the best distillery bars in Dublin to drink at now.

Roe & Co., Diageo’s first Irish whiskey brand since selling off Bushmills a few years ago, resurrects a name that was once a major player in Irish whiskey. The distillery first opened in 1757, and by 1887 the Roe family was producing about 2,000,000 gallons a year, making them as famous and wealthy as the Guinness family.

The distillery ultimately closed in 1923, but Diageo has just introduced a beautiful, state-of-the-art, new distillery and bar that is producing single malt whiskey which will eventually become part of the Roe & Co. blend. The whiskey is being promoted as an ideal spirit for making cocktails, and for good reason – at 90 proof, it stands out in ways that many 80 proof Irish whiskeys don’t.

The distillery’s Power House Bar is perhaps the most artfully designed and inspired distillery bars in the city. The cocktails here focus on five flavor profiles – sour, sweet, bitter, umami, and salt. The last two in particular reveal some unusual and interesting creations, like the Stoker (Roe & Co. whiskey, white port, sparkling coconut water, truffle oil), and the slightly smoky G.M. (Roe & Co. whiskey, rosemary syrup, grapefruit juice, a spray of Talisker). Right now the bar is only open to distillery visitors, but that could change in the future.

Teeling is located in Dublin’s Liberties neighborhood. The distillery, which opened in 2015, was the first to operate in Dublin since the 1970s, so it can be credited with kicking off the urban distilling scene in Dublin.

It released its first whiskey distilled in-house about a year ago (its core range comes from the Cooley distillery), which was a very exciting moment for the Teeling family. The distillery’s Bang Bang Bar is named after a nefarious character who once lived in the neighborhood, but the cocktails you can find there are on the up and up.

Of course, the entire Teeling range is available to sample as well.

Dublin Liberties Distillery opened at the beginning of this year, and is now hard at work distilling its own whiskey. Until then, they continue to blend and bottle some well-regarded sourced whiskey, including The Dubliner and the Dublin Liberties range.

After a tour of the new digs, pull up a bar stool at the cozy Tannery Bar upstairs, surrounded by wood beams and bottle after bottle of Irish whiskey. The bar is open to the public even when the distillery is closed, serving drinks like an Old Fashioned made with The Liberties Oak Devil, an old-school Whiskey Sour, a Manhattan and several variations on the classic Irish Coffee.

Pearse Lyons is another new Dublin distillery with several different expressions of whiskey available, including a 5-year-old single malt that it touts as being the first of that age to appear from a new distillery in a quarter century.

There are different visitor experience options to choose from here, but the best one for drinks is the Cocktail Experience.

During this visit, guests create their own Irish whiskey cocktails under the guidance of an in-house mixologist, before enjoying an artfully made cocktail at McCann’s bar.

McCann’s is on the distillery grounds, but is also open to the public.