The Mayor of Flavortown faces off with a comedy icon for a great cause. 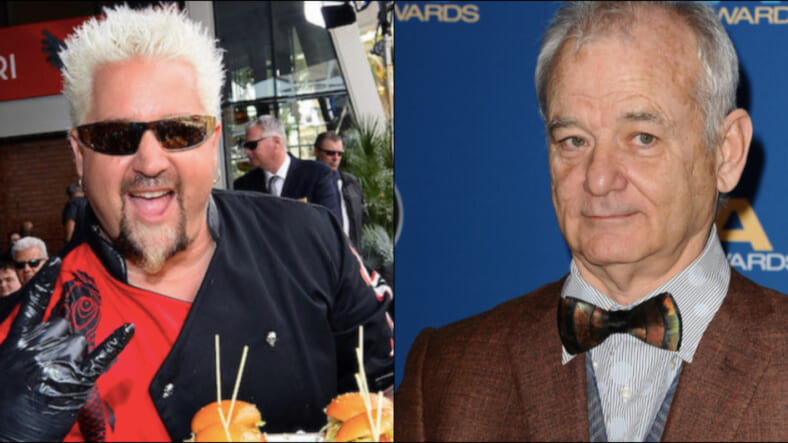 Mayor of Flavortown and all-around good dude Guy Fieri and comedy legend Bill Murray go together like chips and dip, if you think about it. They’re both the kind of guy you hope shows up at the party with his favorite beer and nachos.

Or at least you will feel that way on watching Fieri and Murray compete on Friday, May 15, 2020, in a “nacho-off.”

Murray and Fieri have partnered with Tostitos for the “Nacho Average Showdown.” Murray and his son Homer will face Fieri and son Hunter in what Uproxx describes as a “a four-way virtual nacho-off in an effort to raise some much-needed funds for the Restaurant Employee Relief Fund (RERF).”

This is right up Fieri’s alley, of course, as he’s the guy who reminded the internet he’s about much more than spotlighting good old artery-clogging classic American diner food by already raising over $20 million for food service workers facing money trouble due to coronavirus pandemic shutdowns. That’s enough to provide $500 in individual grants to those who qualify.

Viewers won’t just get to see Fieri and Murray crafting calorie mountains of cheese and chips. Guests will include Shaquille O’Neal and Terry Crews, who will act as contest judges, with Food Network personality Carla Hall hosting.

Best of all, anyone with an internet hookup will be able to watch for free when the contest livestreams on the Food Network’s Facebook page.

The sponsors and participants hope that viewers also donate $10 to RERF, or at minimum order out from a local eatery.

Get ready to get your nacho on by watching the “Nacho Average Showdown” here on May 15th at 5 pm ET.