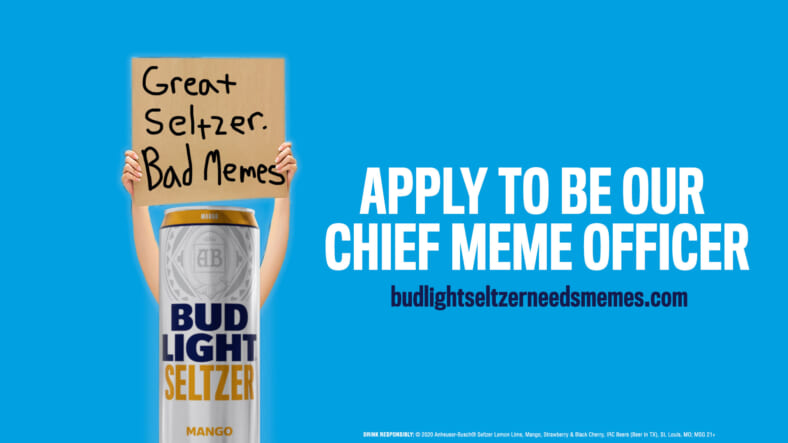 However, knowing that a hard seltzer is only as good as its memes the brand wants to bring their creative to the next level , so they are in search of some fresh thinking. Starting today, the brand will recruit the best memers out there to join the brand’s marketing team for the next three months to help curate epic Bud Light Seltzer memes.

Through September 18, 2020, wannabe CMOs 21 years and older can apply to become the Bud Light Seltzer Chief Meme Officer at BudLightSeltzerNeedsMemes.com, where they can also download meme templates to begin experimenting.

The brand’s CMO responsibilities will include (first and foremost) enjoying Bud Light Seltzer and creating ten (10) viral memes and sharing them via social media.

The Bud fan granted the vaunted title of Bud Light Seltzer’s (first-ever) Chief Meme Officer will be compensated $5,000 per month for three (3) months.

To further sweeten the deal, all applicants will also be entered for a chance to win a three months’ worth of Bud Light Seltzer.