Time to stock up. 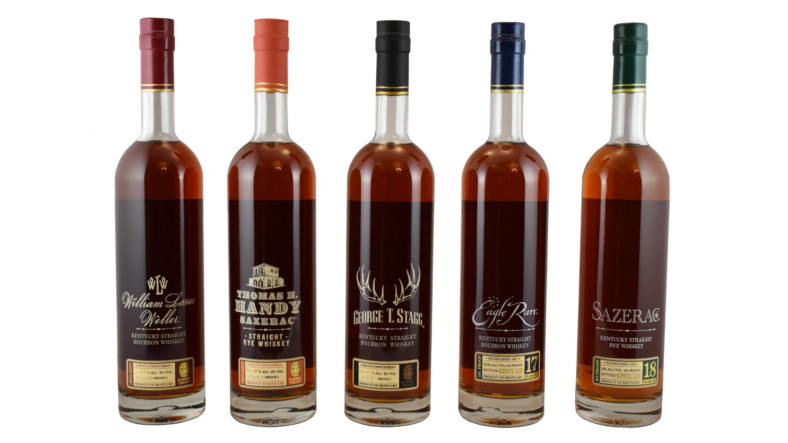 Besides making some seriously fine spirits, Buffalo Trace distillery in Frankfort, Kentucky has always had a deep appreciation for the role whiskey has played in American history.

The Buffalo Trace distillery is a National Historic Landmark and the brand’s bottles  have won more than 20 awards in the last 19 years, including when Col. E. H. Taylor, Jr. Four Grain Bourbon was named World Whiskey of the Year by Jim Murray’s Whisky Bible 2018. So you know that the new Antique Collection is good stuff—and with the leaves falling and the nights getting longer and colder, what’s better than having a finely-aged new bottle of brown liquor to sample?

All of which brings us to Buffalo Trace’s 2019 Antique Collection of whiskeys. The collection consists of some bottles that have already appeared in Jim Murray’s Whisky Bible for 2019 and consists of the following:

Buffalo Trace calls Stagg the “proverbial powerhouse favorite” of this collection. George T. Stagg clocks in at a slightly lowered 116.9 proof in 2019. It will taste the same to Stagg fans, with what the Distillery says are notes of “vanilla and toasted oak with a floral undertone.” That’s in addition to a “long finish of cherries, coffee and black pepper.”

Weller is the Antique Collection’s “uncut, unfiltered, wheated recipe bourbon.” Past editions have been 5 star award winners. In 2019 it clocks in at 128 proof and 12 years of age. Buffalo Trace tasting notes say its “bold flavors include toasted vanilla and coffee.”

Handy is uncut, unfiltered straight-up Kentucky rye. The 2018 edition took a gold medal at the San Francisco World Spirits Competition so you know you’re in for something good. Distilled in 2013, this year’s version of Handy clocks in at a healthy 125.7 proof and tasting notes indicate hints of “creamy butterscotch and vanilla.”

Jim Murray’s Whisky Bible dubbed the previous edition of Sazerac Rye 18 Year Old the “Best Rye Whiskey Aged 11 Years and Over.” In 2019 this straight rye whiskey comes out of barrels aging since spring 2001 and Buffalo Trace tasting notes boast it “has notable flavors of vanilla and maple syrup, with a finish of black pepper and spearmint.”

Buffalo Trace says that beginning at the end of September or early October, the 2019 Antique Collection whiskeys will be available in “limited quantities” for a suggested retail price of $99 per bottle.