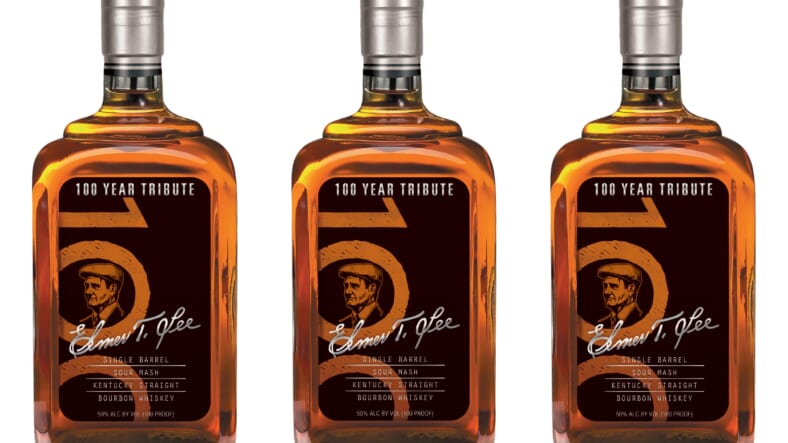 In honor of what would have been Lee’s 100th birthday, the acclaimed Kentucky distillery has made a special batch of Elmer T. Lee 100 Year Tribute Single Barrel Bourbon that is available to whiskey fans beginning this month.

Proceeds from the bottle sales will go towards Frankfort, Kentucky’s VFW Post 4075, where Lee–who created Blanton’s, the world’s first single barrel bourbon–was a member until his death in 2013.

The one time only release has same age and mashbill as the standard Elmer T. Lee bourbon, but this whiskey is bottled at 100 proof. The bourbon is described as having “a nose of maple syrup up front, a taste of creamy vanilla with berries, and a long finish of coffee, toasted oak, and vanilla.”

Elmer retired from Buffalo Trace Distillery in 1985, but continued to serve as an ambassador for Buffalo Trace Distillery and the whiskey world up until his death. Prior to joining Buffalo Trace (then known as the George T. Stagg Distillery) in 1949, Elmer served as a radar bombardier on B-29 flights with the U.S. Army Air Force in World War II. After flying missions against Japan through 1945, Elmer was honorably discharged in 1946, attended college, and graduated with honors in 1949. Upon graduation, he started work at the Distillery where he was eventually named General Manager. He worked at the Distillery until retirement, marking a milestone in his career with the creation of Blanton’s in 1984, the world’s first single barrel bourbon.

“Elmer took a big risk creating a single barrel bourbon, but he hoped it would generate new interest in bourbon and revive the industry,” said Harlen Wheatley, Buffalo Trace’s current master distiller. “At first Blanton’s wasn’t popular, and Elmer feared it may not take off. But today, I think it’s safe to say Elmer made a wise move.”

The Elmer T. Lee 100 Year Tribute Single Barrel Bourbon will sell for $100 beginning this month in very limited in distribution, so score a bottle while you can.